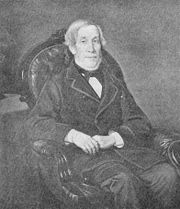 Today is Day of Finnishness in you-guessed-it: Finland. It’s also known as Snellman Day, named after the Finns’ national hero Johan Vilhelm Snellman, but referred to as Day of Finnishness (perhaps because ‘Snellman’ sounds like that teacher in high school whose nostrils screamed when he breathed through his nose).

Snellman was in fact a teacher (but no word on his nasal exhalations). He was also a statesman, journalist and philosopher, who crusaded to make Finnish the national language of Finland. While this seems like a no-brainer in retrospect, it was a controversial issue at the time.

Finnish as a written language dates only to the 15th century. According to Wikipedia:

[*presumably because the author was the only one who understood it.]

In the 16th century, Mikael Agricola had set down the rules of written Finnish in order to translate the New Testament. 300 years later however, outside of religious ceremonies written Finnish was still virtually unused.

Along came Snellman, who encouraged politicians and the upper classes to make Finnish a part of everyday life, a vehicle for the arts and sciences, instead of a vernacular spoken only by commoners and a written form relegated to church services. Snellman felt a unique national language was essential to building a strong, unified nation. His outspoken nationalist agenda—known as the Fennoman movement—was a loaded issue. His newspaper, Saima, was censored by the Russian-dominated Finnish government, and eventually shut down.

After the death of the Russian Czar Nicholas I in 1855, the government eased censorship, and Snellman was appointed a professor at the University of Helsinki. He was appointed to Finland’s Cabinet in 1863 and devoted much of the remainder of his career to fixing the Finnish financial system. Russia granted Finnish a status on par with Swedish in Finland in 1892.

Finnish is virtually an island among European languages. All the other Scandinavian languages—Swedish, Danish, Norwegian, and Icelandic—are closely related, while Finnish’s closest relatives are Hungarian and Estonian.

After over five centuries of Swedish rule and one century as a Russian Grand Duchy, Finland declared its independence on December 6, 1917.

During World War II, Finland successfully defended its independence against the Russian invasion of 1939-1940.

A language of Finnish origin is currently taking over the world, but it’s not the one Snellman spoke. It’s called Linux, an open source computer operating system developed by Helsinki native Linus Torvalds. Linux is used in 90% of the world’s top supercomputers.

[Below: Armi Ja Danny – I Want to Love You Tender: Finnish National Anthem]