Every July 8th, citizens of Skagway, Alaska, hold a wake for a citizen who died on this day in 1898: Jefferson Randolph ‘Soapy’ Smith, the “king of the frontier confidence men.”

Smith got his nickname Soapy from an old scam he played selling soap to miners in Colorado.

It’s hard to believe someone so concerned about the hygiene of his fellow men could get such a bad rep. But you see, Smith wrapped bars of soap in $20 to $50 bills in front of the miners, then double wrapped those in brown paper, claiming that one in ten bars had been wrapped in money. Miners would pay $5 for a nickel’s worth of soap to try their luck.

Miraculously, no one ever won the big bills. Soapy was a master at sleight-of-hand, a skill he picked up in his teens playing the “shell game” with peas and thimbles in back in Texas.

But it was in Denver that Soapy made his real mark. With his “earnings” he opened a gambling establishment known as the Tivoli Club, and organized a gang of pickpockets, muggers, disbarred lawyers, and bribed politicians.

Soapy was as good with words and he was with his hands. Once when Denver authorities brought him to trial, he explained that the Tivoli Club performed a public service, curing gamblers of their addiction, by ensuring they lost. And the court acquitted him.

When the Klondike Gold Rush began, Soapy made his way up north to Alaska, but he let others do the digging.

Smith opened his own parlor and within a few months the 38 year-old was running the town, with a supporting cast of the unusual suspects.

A typical scam: Smith had a monopoly on the local telegraph and charged $5 to send messages. Only the telegraph wasn’t connected to anything but the wall. (Skagway didn’t get a real telegraph office until 1901.)

His last swindle involved a prospector named John Stewart, who made the mistake of walking into Smith’s Parlor with a bag of $2700 (in 1898 dollars) in gold. When Stewart’s money was stolen by men in Smith’s parlor, Stewart took his cause to anyone who would listen. A group known as the Committee of 101, which had been after Smith for years, held a meeting to stop him for good. Smith tried breaking into the meeting with a Winchester, but was stopped by the city surveyor Frank Reid. A gun battle ensued, and Smith died on the spot, bullet through the heart. Reid died 12 days later.

Though not an official holiday, the traditional toast to Soapy Smith is held by the residents of Skagway—and for some reason at Hollywood’s Magic Castle—at 9:15 pm each July 8th, the approximate time of Smith’s death.

Soapy’s wakes may lack the reverence of others, but as wakes go, it’s supposed to be one hell of a party. 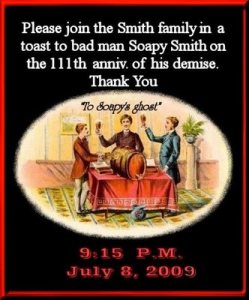