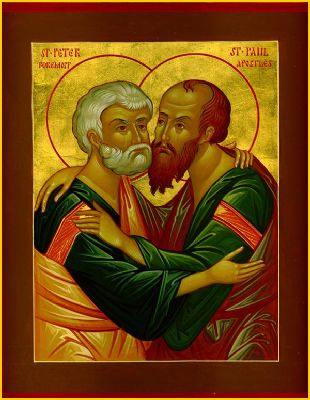 In a word,
Never let go on these three things:
Faith, hope and love.
And know that the greatest of these
Will always be love

June 29 is the Feast Day of St. Peter and St. Paul. Each gets his own saint day, but in the Venn diagram of the Catholic Church, June 29 marks the intersection of the two.

The two Apostles couldn’t have been more different. St. Peter was Christ’s most devoted follower and leader of the Apostles. A simple fisherman, he was born as Simon. His name Peter comes from Petros for ‘rock’. Jesus referred to Simon as his rock, saying “Upon this Rock I will build my church.”

Paul was born Saul, a wrathful and often vicious persecutor of the early Christians, who never encountered Jesus outside his visions. It wasn’t until his vision on the road to Damascus that he was “blinded by the light”. Following his conversion, Paul became the most prolific converter of non-Christians to the faith the world has ever known.

The scriptures don’t detail the death of either saint. It’s believed St. Peter was crucified upside-down. As a Roman citizen, Paul was very likely beheaded. The saints are remembered jointly today because their remains were temporarily moved on June 29, around the year 258 AD to prevent their desecration during the Valerian persecution.

Leaders of the Apostles