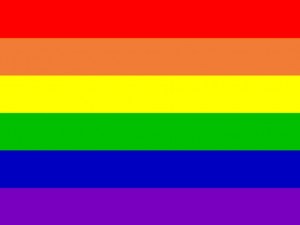 There’s no one moment that “started” the gay rights movement, but many say it began around 1:20 in the morning on June 28, 1969 at the Stonewall Inn in New York City.

The Stonewall Inn was a gay bar on Christopher Street in Greenwich Village. When a handful of officers raided Stonewall in the wee hours of June 28th, they were well within their rights. The bar was owned by the mafia, and it didn’t have a proper liquor license. But the gay clubs were raided with uncharacteristic frequency, and the police would go the extra step of arresting customers en masse for “disorderly conduct.”

The half dozen police officers expected that the gay clientele would comply and line up docilely, which may have accounted for the lack of backup. The last thing they imagined was that their safety would be in danger from drag queens and other gays and lesbians who had been harassed one time too many.

Back in 1969 homosexual sex was outlawed in virtually every state. Even New York City, vigilante crews had formed to rid the city of the gay menace. Expressing a homosexual orientation in public could mean not just being ostracized, but beaten or even killed.

Stonewall’s windows were painted black. To get in patrons knocked on the club door and were peered at through a peephole. By raiding Stonewall, the police brought homosexuality into the outside world, but not in the “shameful” way they anticipated. Instead, as word spread quickly of the raid, homosexuals converged from all parts of the Village, to join in the Boston Tea Party of modern times. Essentially, ‘gayness’, normally confined to the interiors of clubs, exploded onto the streets, loud and wild and raucous. Rioters shook buses, blocked traffic, and shouted “Christopher Street belongs to the queens!”

“…as the patrons trapped inside were released one by one, a crowd started to gather on the street. It was initially a festive gathering, composed mostly of Stonewall boys who were waiting around for friends still inside. Cheers went up as favorites emerged from the door, striking a pose and swishing by the detective with a “Hello there, fella.”… Suddenly a paddywagon arrived and the mood of the crowd changed. Three of the more blatant queens—in full drag—were loaded inside, along with the bartender and doorman, to a chorus of catcall and boos from the crowd…The next person to come out was a dyke, and she put up a struggle. At that moment, the scene became explosive.” (Village Voice, June 19, 1989, Lucian K. Truscott IV)

The following evening the rioting grew fiercer. Supporters, both gay and straight, gathered along Christopher Street, and the Tactical Patrol Force couldn’t bring order back to the streets.

Meanwhile the owners of the club changed Stonewall overnight to seize onto the symbolic value their club had suddenly attained. By Saturday night they served only sodas and were giving them away for free.

Before June 28, 1969, “the Stonewall Inn attracted larged crowds of chino-clad gay men in their late teens and early twenties because the Mafia-owned bar allowed men to dance with each other as long as they were willing to pay exorbitant prices for watered down drinks.” (From Perverts to Fab Fave, Bigner & Streitmatter) After June 28, 1969, it brought gay rights to the public consciousness and became the rallying cry for a new nation-wide civil rights movement.

Four years later homosexuality was reclassified in the DSM (Diagnostic & Statistical Manual of Mental Disorders) from a mental disorder to a “sexual orientation disturbance.”

Police departments also learned from the mistakes at Stonewall. First and foremost, never raid a gay bar right after Judy Garland’s funeral. Judy Garland died in London the week before of an overdose of sleeping pills. Her body was transported to New York, and Wednesday through Friday, thousands of her fans, many of them gay, passed by her coffin to pay their respects. The raid was that night. Recalled Seymour Pine, the officer who planned and led the raid, “If I had known that Judy had died at that point, I wouldn’t have had the raid.” (The Villager, June 2004)