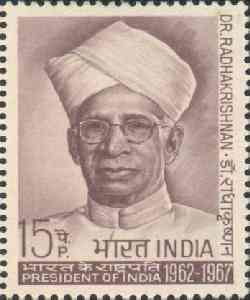 True seekers are those who never end their quest.

All across India hundreds of millions of schoolchildren celebrate Teachers’ Day. In many schools, children dress up like their teachers. Teachers meanwhile, sit in the back of the room, like students, as the students lead class, and roles are reversed for a day. Students have a chance to see from their mentors’ eyes, and teachers remember what is was like to be a student, to have the one other job as important as teaching: learning.

The lesson plan may include a look at the man behind Teachers Day, Sarvepalli Radhakrishnan.

Born on this day in 1888 in Tamil Nadu, India, Radhakrishnan became one of the leading philosophers of the 20th century. According to George Conger:

“…Among the philosophers of our time, no one has achieved so much in so many fields as has Sarvepalli Radhakrishnan of India … William James was influential in religion, and John Dewey has been a force in politics. One or two American philosophers have been legislators. Jacques Maritain has been an ambassador. Radhakrishnan, in a little more than thirty years of work, has done all these things and more… Never in the history of philosophy has there been quite such a world-figure…. like a weaver’s shuttle, he has gone to and fro between the East and West, carrying a thread of understanding, weaving it into the fabric of civilization.”

Radhakrishnan taught subjects including philosophy, ethics and comparative religion at the Universities of Calcutta, Oxford, and Ahndra.

In 1952 he was elected the first Vice-President of India. Ten years later the philosopher became India’s second President.

When his friends and former students wished to make his birthday a holiday, Radhakrishnan did not forget his first calling. He replied, “Instead of celebrating my birthday, it would be my proud privilege if 5 September is observed as Teachers’ Day.”

Throughout the rest of his life, Radhakrishnan went on learning and teaching, holding true to his most firmly held belief:

“The true seekers are those who never end their quest. Even at the termination of one’s life one is still searching. Fulfillment is a distant goal.”