In Russia and in several of the countries that were formally part of the Soviet bloc (including Belarus, Ukraine, and Moldova), today is Victory Day. It celebrates the surrender of Germany in 1945 and the end of World War II in Europe.

France, the United Kingdom, and other Western European countries celebrate Victory Day on May 8, but it was already the following day when the news hit Russia, the only country in the world that spans 11 time zones. And ever since then, May 9 has been celebrated with full Russian military pomp and circumstance. This year (2010) troops from England, France and the United States participated in Russia’s Victory Day parade for the first time. 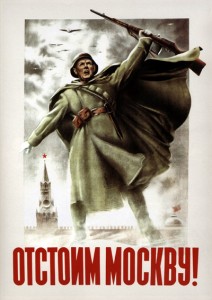 Despite a 1939 treaty with Germany agreeing not to attack each other (and to split up Poland instead) Russia found itself cast in the role of Germany’s next victim only two years later. They encountered devastating losses in the first couple of years. However,

“…Russia was quick to learn from its mistakes, quicker than the Germans learned from theirs…Part of this was accomplished by simple attrition: less capable officers and troops were killed off, more capable ones survived. But there was also feedback from the front. Divisions were left in action until fewer than half the troops remained alive and fit for action…The veterans knew that everyone’s prospects of survival increased according to how much of their combat experience could be transferred to the new recruits.”

In addition to its effective armored “Tank Corps” attacks, for which Germany never developed a practical countermeasure, the Soviets made use of their biggest advantage: Europe’s largest population. They overpowered the Germans with sheer numbers and indomitable resilience. The unfortunate result of this strategy was that over 20,000,000 Soviets were killed in the war, nearly half of them civilians.

While France, the United Kingdom, and the U.S. focused mainly on the Western Front…

“the ‘Eastern Front’ was the largest theater of war in history, notorious for its unprecedented ferocity, destruction, mass deportations, brutal weather conditions, and immense loss of life by means of battle, starvation, disease, and massacre…The Eastern front was arguably the single most decisive component of World War II, eventually serving as the main reason for Germany’s defeat.”

Standing out even among the battles of the Eastern Front were the Sieges of Leningrad and Stalingrad. Leningrad lasted nearly 900 days and was the deadliest siege in world history. But it was the Battle of Stalingrad that marked the turning point of the war and eventually broke the back of the German army.

“Victory at Stalingrad did not come easily or cheaply for the Russians. Nearly half a million soldiers and civilians died in defense of the city. Almost all of its homes, factories, and other buildings were destroyed. But the Russians had won, and that victory united the Russian people, giving them the confidence and strength that drove them on to Berlin.”

Had Hitler cut his losses at Stalingrad, the war might have turned out differently, but in January 1943, he ordered General Von Paulus:

“6 Army will hold their positions to the last man and the last round and by their heroic endurance will make an unforgettable contribution towards the establishment of a defensive front and the salvation of the Western world.” — Adolf Hitler, Jan. 24, 1943

According to World War II: Blitzkrieg and the Eastern Front,

“Out of 250000 [German] soldiers trapped in the Stalingrad pocket, approximately 90000 became prisoners; Barely 5000 survived the war.”

Upon learning of the defeat…

“Hitler ordered a day’s national mourning in Germany, not for the men lost at the battle, but for the shame von Paulus had brought on the Wehrmacht and Germany.”

The final battle of the war (in Europe) and indeed the last major battle on Western soil was the Battle of Berlin. In April 1945, the Soviets plowed into Berlin with 2.5 million soldiers. Hitler committed suicide in Berlin on April 30. Germany officially surrendered on May 8, 1945.