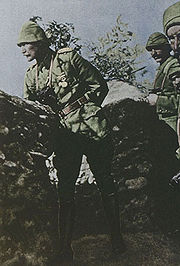 The long and brutal battle for the Dardanelles is one of the most commemorated campaigns of the 20th century.

Turkey, meanwhile, remembers the nine-month campaign each year on March 18—the anniversary of the 1915 naval battle of Canakkale which, had the Allies succeeded, would have paved the way for the capture of Istanbul. Turkey calls March 18th the “Victory of Canakkale”, or the more sobering title Martyrs’ Day.

The Allies’ plan was to combine their naval strength to blast their way through the Dardanelles, a stretch of water connecting the Aegean Sea to the Black Sea. The Dardanelles are 60 km long and a maximum of 7 km wide. At its narrowest point (appropriately named “the Narrows”) overlooked by the city of Canakkale, the shores are separated by a mere 1600 feet.

However, on March 18, after a month of French and British naval bombardment, the Allied attempt to breach the Dardanelles met a disastrous failure. The fleet failed to clear the minefields strategically placed by the Ottomans and several key British and French warships were destroyed.

It became clear to the Allies that Turkish resistance was too strong for a purely naval victory. They sent in ground troops, including tens of thousands of eager Australian and New Zealand recruits.

Against the armed might of four nations, including two of the most powerful navies in the Western world, Turkish armed forces held their ground for a full nine months. The long campaign and victory in January 1916—like the initial victory on March 18, 1915—fueled national pride and cohesiveness across the land that would be Turkey.

Much of the success of the defense of Canakkale is attributed to the strategic foresight of a young commander by the name of Mustafa Kemal.

After World War I, Mustafa Kemal went on to lead forces in the Turkish War for Independence, and became the founder and leader of the new nation of Turkey. He is probably the most significant figure in the creation of of Turkey as we know it today, and because of the significance of Canakkale, many view 1915—not 1923—as the true birth year of the Turkish state.

One side won, one side lost. But statistics tell another story.

The Turks and the Allies suffered nearly a quarter million casualties each—that’s over half of all men on both sides who fought in the nine-month battle.

“Those heroes that shed their blood, and lost their lives …
You are now lying in the soil of a friendly country
Therefore, rest in peace.
There is no difference between the Johnnies
And the Mehmets to us where they lie side by side,
Here in this country of ours.
You, the mothers, who sent their sons from far away countries…
Wipe away your tears.
Your sons are now lying in our bosom and are in peace.
After having lost their lives on this land, they have
Become our sons as well.”