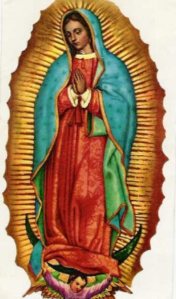 “…one may no longer consider himself a Christian, but you cannot truly be considered a Mexican unless you believe in the Virgin of Guadalupe.”

It’s been said that Mexico came into being not in 1821–the year Spain recognized its independence–but nearly 300 years earlier, in 1531, when a recently widowed peasant-farmer named Juan Diego Cuauhtlatoatzin, beheld the most spectacular vision in Mexican history.

On December 9, he was out walking near the ruins of Tepeyac Hill, where Aztecs once worshipped the mother goddess Tonatzin, when a young incarnation of the Virgin Mary appeared before him encompassed in a halo of light. She spoke to Juan Diego in his native tongue of Nahuatl, and asked him to deliver a message to the Mexican bishop: to build a church on the ground where she stood.

Upon hearing Juan Diego’s story, the bishop had his doubts. So the next time Juan Diego saw the Virgin, he confessed to her his failure to convince the bishop. She told him to pick some flowers at the top of the hill–even though it was December and no flowers should have been blooming. There he found Castilian roses, native to the bishop’s hometown in Spain. The Virgin arranged them in his tilma (apron), but when Juan Diego opened his tilma to the bishop, it held not flowers but the lifelike image of the Virgin of Guadalupe upon it.

Word spread of the miraculous vision and the image on the cloth. What the event suggested to the descendants of the Aztecs, many of whom had been made to feel unworthy by the strange pushers of this new faith due to the color of their skin, was that the Virgin revealed herself not to a Spanish bishop, but to a common, dark-skinned peasant. And Guadalupe herself was not the pale icon that had been forced upon the people by Europeans, but a mestizo, a mixture of races that would come to represent Mexico.

During the Mexican War of Independence in the 1810’s, the Lady of Guadalupe became the symbol of the new-born nation and the country’s patron saint.

Today Mexico is still overwhelmingly Catholic, but as Gustavo Arellano points out:

You don’t have to be Mexican or even Catholic to celebrate Guadalupe. Heck, you don’t even have to believe in God. All you need is a belief in the equality of people that’s in the core of Guadalupe’s message and you will surely feel her redeeming love.

On December 12, Mexicans and Mexican-Americans gather in churches and communities throughout North America and celebrate the symbol of the people of Mexico and patron saint of the Americas.

One Reply to “Feast of the Virgin of Guadalupe”