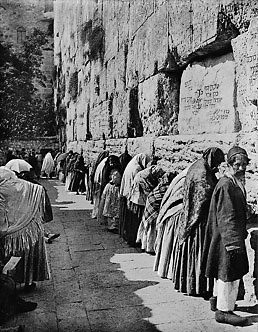 The Big Guy of the three consecutive Jewish holy days is the last, the Tenth of Tevet. It is a day of fasting.

The Tenth of Tevet marks the first day of the siege of Jerusalem in 589 BC by the Babylonian king Nebuchadnezzar (630-562 BC). The city would fall thirty months later in 587. It was actually the third time in as many decades that Jerusalem had faced the Babylonians.

The first was in 606 BC by King Nabopolassar; the second around 597 BC by his son, the new king, Nebuchadnezzar, and finally eight years later by Nebuchadnezzar again. This time Nebuchadnezzar was feeling less charitable toward the city’s residents. After the city’s walls were breached, Solomon’s Temple was destroyed, Jerusalem was razed to the ground, and its remaining inhabitants were exiled.

This date is among the most tragic in all of Jewish history and yet, as Rabbi Yaakov Asher Sinclair points out, “on the tenth of Tevet itself, ostensibly, nothing really tragic happened. No wall was breached. No one died. Not a shot was fired. Only the siege was begun.” However the day marked the beginning of the end. The diaspora that would define the shape of Judaism for millennia.

The 10th of Tevet has also been chosen by some as a symbolic anniversary date of the millions who died in the Holocaust, whose dates of death may not be known.

In March of 2003, as the U.S. prepared for war, stories circulated about Saddam Hussein comparing himself to the ancient biblical king Nebuchadnezzar. And an evangelical minister stated in his sermon that Nebuchadnezzar was one of “the world’s greatest terrorists, maybe even higher than Bin Laden or Hitler…” Yet in Iraq he is considered a national hero. How is this dichotomy possible?

Nebuchadnezzar’s reign lasted 45 years, during which time Babylonia was at the peak of its power. He wrested his father’s territory from the Assyrians, halted Egyptian dominance, and defended the empire from Persian invaders. Under his rule Babylon grew to be the largest and most glorified city in the world with a defensive wall that stretched 56 miles. The metropolis boasted hundreds of towers, including the massive ziggurat we know as the “Tower of Babel” and the Great Temple of Marduk which held a 25 ton golden statue of Baal. His most innovative creation may have been the Hanging Gardens of Babylon. One of the Seven Wonders of the Ancient World, the Gardens were irrigated by a series of hydraulic pumps. According to legend the Gardens were built to cheer up Amytis, Nebuchadnezzar’s wife, who was homesick for her native land of Midea.

It would be like a single President ruling America from FDR through the Reagan years, taking the country from depression to superpower and defeating both Germany and the USSR in the process–not to mention overthrowing a few Central American republics along the way. So it is not difficult to see how he could be regarded as a national hero to one people, even though he brought about the near annihilation of his enemies.

The strange truth is, though Baghdad sits near what was once Babylon, the ancient civilization bears little resemblance to Iraq. To the Judeans Babylonia symbolized the boundless superpower. An ostentatious empire governed by decadence, arrogance and amorality.

Its leader was the son of the former leader Nabopolassar. Both father and son waged large military campaigns in the Middle East. And during their reign Babylonia won out over its enemies as the world’s single superpower.

So how can two societies with such conflicting memories of the same events ever find a common ground?

The answer may come in the shape of a figure who arrived on the scene an estimated 1500 years before Nebuchadnezzar: Abraham. Abraham (Ibrahim in Islam) is the father from which all three religions derive. He is the first monotheist. But his story is for another day…

Mother of All Sermons

One Reply to “10th of Tevet – the Siege of Jerusalem”