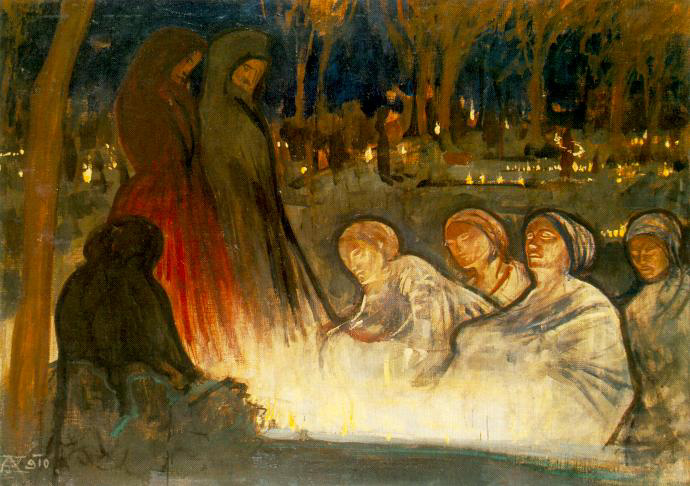 …For it’s the turn of the year and All Souls’ night,
When the dead can hear and the dead have sight…

Whereas All Saints Day recognizes the departed whose souls have found refuge in Heaven, All Souls Day remembers those restless spirits still lingering in Purgatory.

All Souls Day originated not in Rome but France.

Around 820 Amalarius of Metz (northwest of Strasbourg) wrote “After the offices of the saints, I have inserted an office for the dead. For many pass over from this present age who are not immediately united with the saints.” (ie. “don’t go directly to heaven.”)

In the early 11th century, St. Odilo, fifth abbot of the Cluny monastery, officiated the feast of All Souls on November 2. Over the century, the tradition was adopted by dioceses across Western Europe.

On All Souls Day, families visit the graves of their loved ones and light candles in their memory.

Fear not the shudder that seems to pass:
It is only the tread of the their feet on the grass…
…For the year’s on the turn and it’s All Souls’ night,
When the dead can yearn and the dead can smite…

…Let them see us and hear us, and say: “Ah, thus
In the prime of the year it went with us!”

All Souls Day is celebrated on November 2, unless the 2nd falls on a Sunday, in which case it’s observed on Monday, November 3 as was the case in 2008.

One Reply to “All Souls Day”