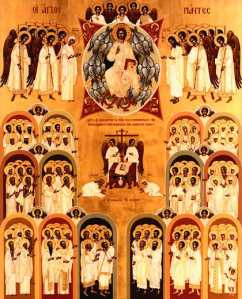 Every day of the Catholic calendar honors at least one Saint.

But for all those Saints who just weren’t saintly enough to get their own day, there’s All Saints Day.

Medieval liturgists traced All Saints Day in the Catholic Church to the consecration of the Pantheon, originally a pagan temple built by Emperor Hadrian around 125 AD. The Pantheon honored the Roman, well, Pantheon (literally, “All Gods”.)

On May 13, 609 or 610, the Pantheon was consecrated by Pope Boniface IV in the name of the Virgin Mary and All Martyrs. The date, May 13, may harken back to the old festival Lemuralia, during which Romans remembered the dead and cast out restless spirits.

In the 730s Pope Gregory III dedicated a chapel at St. Peters Basilica on November 1 and declared it an annual holy day. The chapel housed the relics “of the holy apostles and of all saints, martyrs and confessors, of all the just made perfect who are at rest throughout the world.”

St. Peters Basilica is believed to be the burial place of Saint Peter himself. This, the most famous place of worship in Christendom was built beside the “Circus” of Caligula, where the Emperor Nero organized mass executions of Christians beginning in 65 AD.

St. Peter was crucified there (upside-down) at the site in 67 AD. Today the Vatican City’s Colonnade surrounds what was once the notorious Circus, its center marked by an enormous Obelisk brought to Rome after the conquest of Egypt.

Some historians attribute the November 1 date to the church’s desire to supplant regional harvest festival holidays devoted to the dead, such as the Celtic Samhain.

Today All Saints Day glorifies the memory of those souls, known and unknown, who have found a place in heaven.

For all those stuck in Purgatory, there’s All Souls Day…

2 Replies to “All Saints Day”