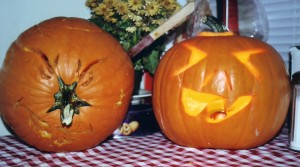 Pagan: “a follower of a rustic or provincial religion”
from the Latin pagus, meaning a rural district.

The word “pagan” goes all the way back to the Greek root pagos meaning “that which is fixed”. “Fixed” as in “staying in position”, not like, your dog.

After crossing the Adriatic, the Romans used the word pagus to refer to a rural district. Pagan came to mean “country-dweller”.

Under Constantine, Christianity was not only tolerated, the religion replaced paganism throughout the Empire, with a top-down implementation. [For a more scholarly discussion, see the deleted “Storm” scene from X-Men 1.]

Long after Europe had converted to Christianity, some country-dwellers continued to worship their local and regional deities and observe the seasonal rituals of their ancestors to ensure prosperous harvests. Eventually the name for country-dweller became synonymous for followers of the old religions.

What makes Halloween so special among American holidays is that it appears to harken back to its pagan roots without the veneer of a Christian holiday, like Easter and Christmas. While Celtic and Germanic traditions such as Walpurgis Night (Witches Night) and Beltane (May Day) have all but died out, Halloween is among the most widely celebrated holidays in the U.S.

And while several national holidays (such as Memorial Day, St. Patrick’s Day, and Labor Day) are celebrated with parades, sports events, or barbecues, Halloween has several holiday-specific traditions that are celebrated at no other time of the year. This puts it in a small class of holidays that include Christmas, Easter, Thanksgiving, New Year’s, and Independence Day. Yet unlike the above holidays, Halloween is not recognized by the U.S. government. Nobody gets the day off. And still Halloween captivates the country at large and is becoming increasingly popular in Europe. This may be why Halloween has been singled out as contrary to the teachings of Christianity by some sects.

In truth, the holiday owes as much to traditions picked up during the celebrations of the ‘All Saint’s Day’ as to its pagan past. An observer of the Celtic holiday Samhain would hardly recognize the holiday today. Samhain was a cross-quarter day (directly between the equinox and solstice) when the Celts would practice acts of divination—predicting the future.

Some historians believe it was also a day to commemorate the dead, which is why the Pope moved All Saints’ Day–originally May 13–to November 1 to compete with the age-old local pagan traditions.

German and Irish immigrants brought their harvest traditions with them to America in the 19th century, such as the good old pagan bonfire on All Hallow’s Eve.

Hallowe’en masquerade parties were fashionable in Victorian America at the end of the 19th century. By the 20th century, the holiday belonged to the kids.

Which came first, the trick or the treat?

The British tradition of playing pranks on one’s neighbors on the night before Guy Fawkes Day (instituted 1606) traversed the Atlantic, taking hold on All Hallow’s Eve. On the nights leading up to All Soul’s Day, youths would take gates off their hinges, soap up neighbors’ windows, and create all-around havoc and mischief. (Now October 30 is known as Mischief Night). Today kids are much less prone to pull pranks on Halloween, but are more than happy to receive their sugar-coated pay-off.

Halloween is at once a caricature of traditions of rustic peoples, as seen through the eyes of their former enemies, and a wholly unique celebration, that has picked up its own imagery and rituals throughout the centuries.

On Paganism and Etymology