At twenty minutes before eight, central time, Professor Farrell of the Mount Jennings Observatory, Chicago, Illinois, reports observing several explosions of incandescent gas, occurring at regular intervals on the planet Mars. The spectroscope indicates the gas to be hydrogen and moving towards the earth with enormous velocity.

We now return you to the music of Rámon Raquello, playing for you in the Meridian Room of the Park Plaza Hotel, situated in downtown New York.

In England Mischief Night originally referred to April 30 (May-Eve or Witches Night), the evening before May Day. Exactly six months apart, May Day and Samhain (November 1) were two of the four cross-quarter dates that Celtics and Druids celebrated during the year. The term Mischief Night was later applied to November 4, the evening before Guy Fawkes Day, when youths would play pranks on unsuspecting neighbors, like soaping up windows and prying gates off their hinges.

When and how Mischief Night got transferred to the evening before Halloween isn’t clear. In the United States, where Guy Fawkes Day isn’t observed, youths in the 1930s took it upon themselves to cause mayhem on the nights leading up to Halloween. What began as minor vandalism–egging cars and toilet papering houses–moved on to arson and destruction of property. In the 1980s and early 1990s, cities such as Camden, New Jersey, and Detroit–where October 30 is called “Devil’s Night”–reported over 100 fires in a single evening. Since that time however, serious Mischief Night crime has significantly declined.

It’s ironic that originally November 1 was the big holiday, and All Hallow’s Eve, was its prologue. Now Halloween has become the major holiday in itself, and Mischief Night fulfills some of the purpose Hallow’s Eve used to serve.

War of the Worlds

The greatest Mischief Night prank ever pulled happened seventy years ago today. A 23 year-old stage and radio actor named Orson Welles and his Mercury Theatre Players broadcast a radio rendition of H.G. Wells’ The War of the Worlds. Rather than creating a static stage reading or radio-play, Welles took the extraordinary step of reciting the events of the novel as if it were a real news broadcast.

After the initial introduction, in which Welles explained this was a radio play of War of the Worlds, a fake announcer took the listener to the Park Plaza Hotel to hear to music of “Ramon Raquello and his orchestra.” The music was periodically interrupted to inform the listener of live events going on elsewhere, from reports of a gas explosion seen on Mars, to the crash landing of an alien craft in Grover’s Mill, New Jersey.

REPORTER: More state police have arrived. They’re drawing up a cordon in front of the pit…Wait a minute! Something’s happening… (Hissing sound) A humped shape is rising out of the pit. I can make out a small beam of light against a mirror. What’s that? There’s a jet of flame springing from that mirror, and it leaps right at the advancing men. It strikes them head on! Good Lord, they’re turning into flame! (Unearthly shrieks) Now the whole field’s caught fire. (Explosion) The woods..the barns…the gas tanks of automobiles…it’s spreading everywhere. It’s coming this way. About twenty yards to my right… (Abrupt dead silence)

ANCHOR: Ladies and gentlemen, due to circumstances beyond our control, we are unable to continue the broadcast from Grover’s Mill…We continue now with our piano interlude… 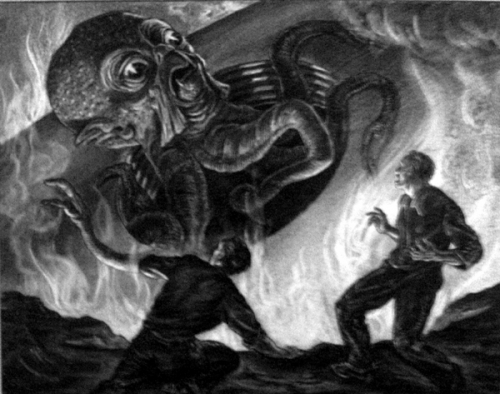 ANCHOR: Ladies and gentlemen, I have a grave announcement to make. Incredible as it may seem, both the observations of science and the evidence of our eyes lead to the inescapable assumption that those strange beings who landed in the Jersey farmlands tonight are the vanguard of an invading army from the planet Mars.

The battle which took place tonight at Grovers Mill has ended in one of the most starling defeats ever suffered by an army in modern times; 7000 men armed with rifles and machine guns pitted against a single fighting machine of the invaders from Mars. 120 known survivors…

The monster is now in control of the middle section of New Jersey and has effectively cut the state through its center. Communication lines are down from Pennsylvania to the Atlantic Ocean. Martial law prevails throughout New Jersey and eastern Pennsylvania.

Tragically, New Jersey was in tact. However, the broadcast reached an estimated 6 million listeners and led to widespread hysteria across the tri-state area.

At the end of the broadcast, Orson Welles assured his listeners that the prank was simply:

…the Mercury Theatre’s own radio version of dressing up in a sheet and jumping out of a bush and saying Boo!…we couldn’t soap all your windows and steal all your garden gates by tomorrow night…so we did the next best thing…So goodbye everybody, and remember please…That grinning, glowing, globular invader of your living room is an inhabitant of the pumpkin patch, and if your doorbell rings and nobody’s there, that was no Martian…it’s Halloween.