But the angel said to her, “Do not be afraid, Mary, you have found favor with God. You will be with child and give birth to a son, and you are to give him the name Jesus.

Up until 1752, March 25th was the first day of the New Year in much of the English-speaking world. It was also known as Lady Day back then. March 25 marks the anniversary of the Annunciation—when the Angel Gabriel appeared to the Virgin Mary to inform her of her child to be.

In the 6th century, a monk and historian named Dionysius Exiguus was asked to calculate the dates for Easter for many years. In order to do so, he set out to determine the precise dates of Jesus’s birth and death. Dionysius devised the Anno Domini (A.D.) dating system by counting backwards to Christ’s birth, or more accurately, Christ’s incarnation.

Using the reigns of Roman leaders, Dionysius calculated that the Christian calendar began 754 years after the foundation of Rome. He didn’t consider the first day of the Christian Era to be January 1 or even December 25, but nine months earlier—March 25—the Annunciation. In essence, the conception of Christ’s corporeal presence.

Though there are no clues in the Bible as to when the Annunciation occurred (except that it was six months after the conception of John the Baptist), early Christian scholars placed the date precisely nine months before Christmas.

For much of Christianity’s history, the Annunciation was one of the most important holidays of the year. Over the last few hundred years, the emphasis on the Annunciation has diminished, but it is still widely celebrated across the Christian world. 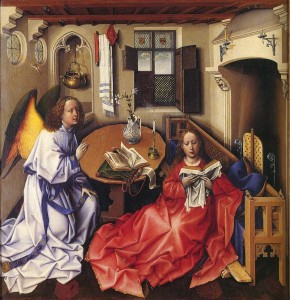 Why Do We Call Spring ‘Spring’?