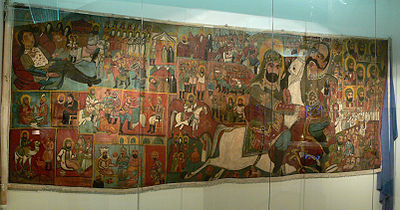 Ashura (aka Ashoura) means 10th. Ashura falls on the 10th day of Muharram, the first month of the New Year. Fasting, though not obligatory during Muharram, is highly encouraged on this date.

Ashura is observed by both Shi’a and Sunni Muslims throughout the world, although for varying reasons. These differences give insight to the both commonalities and the conflicts between the two branches of Islam.

Ashura is one of the most sacred days of the year for Shi’a Muslims, who commemorate the martyrdom of Hussein ibn Ali in the Battle of Karbala. The battle took place on Muharram 10, 61 AH, or October 10th 680 CE in what is now Iraq.

Hussein was the son of Ali ibn Abi Talib and the grandson of the prophet Muhammad. Hussein and over a hundred of his followers, many of whom were family of Muhammad, were slain in the Battle of Karbala.

Hussein is the third Imam of Islam for the Shi’a Muslims.

In the immediate wake of the passing of Muhammad, disagreement arose as to the true successor of Muhammad, and two groups solidified.

The larger group elected the Abu Bakr, Muhammad’s father-in-law and close companion, citing among other things, Muhammad’s asking of Abu Bakr to lead prayers at mosque shortly before his death. These followers became the Sunni. They felt that election was the accepted way of deciding leadership at that time, and that Muhammad would have agreed to this, or would have left no doubt as to his successor.

But the election took place without the participation of key members of Muhammad’s family, including his daughter Fatima and son-in-law Ali, who were preparing Muhammad’s body for burial. This smaller group believed Muhammad chose Ali as successor, citing as partial evidence a speech Muhammad made at Ghadir Khumm:

“Of whomsoever I am the mawla, Ali is his mawla.”

Mawla means “friend,” but it can also mean “master” or “protector.”

Also, the Shi’a believed that since the prophet Muhammad was appointed by God and God alone, his legacy was passed on by blood, not by the elections and factions of men.

In the 24 years between Muhammad’s death (632 CE) and Hussein’s ascension to Caliph, three Caliphs ruled the Islamic empire: Abu Bakr, Umar, and Uthman.

Under their reigns the Empire spread from Arabia to what is now Pakistan and Afghanistan in the East, to Turkey and Georgia in the North, and to southern Spain and northern Morocco in the West.

Uthman’s reign was the longest, lasting just over a decade. In 656 CE Muslim rebels laid siege to his palace and killed the Caliph. What follows is one of the most hotly debated aspects of all Islam.

Uthman was succeeded by the son-in-law of Muhammad, Ali ibn Abi Talib. Initially Ali is reported to have initially refused the Caliphate, but he eventually accepted.

Aisha, a wife of Muhammad and daughter of the first Caliph Abu Bakr, believed Ali let Uthman’s killers off the hook too easily and raised an army to overthrow Ali. This did not succeed, but increased tensions between the two factions.

Around this time Muawiyah I, governor of Syria appointed by Umar, refused to acknowledge Ali as the new Caliph. Muawiyah had been the son of a powerful family controlling Mecca in the days of Muhammad. Ali doubted his piety, for Muawiyah had converted to Islam only when it was politically advantageous to do so. Muawiyah rebelled against Ali in what is known as the first Fitna, or Muslim Civil War. A truce was reached, but when Ali appointed one of Uthman’s suspected killers to be governor of Egypt, Muawiyah invaded Egypt and assumed authority.

In 661 CE the first Imam Ali was killed by the poisoned sword of a Kharijite. By this time Muawiyah, as ruler of Syria and Egypt, was the most power man in the Empire. He forced Ali’s oldest son, Hasan, to step down as the new Caliph.

When Muawiyah died in 680 CE (60 AH) he appointed his son Yazid as Caliph. This was the first time the Caliphate had been passed from father to son.

Which brings us to Hussein ibn Ali. Hasan’s younger brother. Hussein refused to acknowledge Yazid as ruler and mounted a campaign against him.

Meanwhile rebellion broke out against Yazid in Kufa. Yazid’s forces squashed the rebellion.

Hussein, unaware of this, set out for Kufa with a band of followers numbering between 108 and 136. He expected to be greeted with support in Kufa, but encountered Yazid’s troops, led by Umar ibn Sa’ad near the city of Karbala.

It was on the tenth day of Muharram that Hussein ibn Ali and all his supporters were killed by overwhelming forces.

In the aftermath of the battle the news of Hussein’s death solidified the Shi’a people against the Umayyad dynasty.

“Many westerners do not understand why it is that Shia Muslims mourn the martyred Imam Hussein as though the event did not occur a thousand years ago but as if it happened as recently as yesterday.”

Today Shi’a Muslims around the world are united in their view of Yazid as a force of evil.

Many Sunni join them in this depiction. However, Sunni are divided. And in addition to remembering the death of Muhammad’s grandson Hussein, Sunni observe Ashura for additional reasons. According to tradition, the 10th of Muharram is the anniversary of the date:

The origin of the establishment of Ashura for all these dates is unlcear. In his journeys Muhammad observed the Jews celebrating the tenth of Muharram as a day of Atonement (Yom Kippur).

Today, both Sunni and Shi’a mourn the tragedy of the death of the grandson of Muhammad, and Ashura is commemorated in different ways by the one-billion-plus followers of Islam.

In Flirting and Flag-Waving: the Revealing Study of Holidays and Rituals, Atimai Etzioni observes:

“I had long been deeply impressed by the religious fervor of hundreds of thousands of Iranians whom newsreels in the 1980s showed marching in the streets, flagellating themselves with heavy-duty, Hydra-headed whips, drawing blood to commemorate the martyrdom of Iman Hossein in 683 CE. When I found myself in Shiraz on the memorial day Arbaeen, which marks the 40th day after the martyr’s death, I heard that self-flagellations were about to take place down the road, and I rushed there with my camera and notebook. What I found was a well-stylized dance. Young men were eagerly stepping in a circle to the tune of pleasant, if repetitive, music, gently waving slight whips, with which they symbolically touched their well-covered backsides. They did not even work up a sweat, much less draw blood.