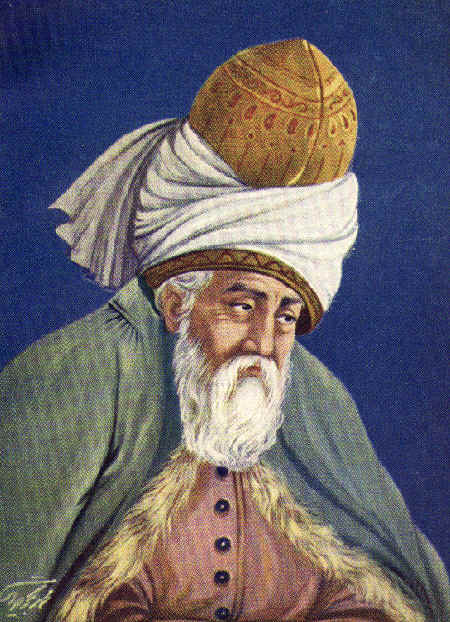 Everything you see has its roots in the unseen world.
The forms may change, yet the essence remains the same.
Every wonderful sight will vanish, every sweet word will fade,
But do not be disheartened,
The source they come from is eternal, growing,
Branching out, giving new life and new joy.
Why do you weep?
The source is within you
And this whole world is springing up from it.”

December 17 is the Urs of Mawlana Jalal ad-Din Muhammad Balhi, or as he’s known affectionately in the West, Rumi, master Persian poet and proto-founder of the Sufi Order of the Whirling Dervishes.

Urs refers to the death of a Sufi saint, but it comes from the Arabic word for “wedding” and literally means “nuptial” or “bride’s night”. In Sufism, death is viewed not as a tragedy but as a joyous union of the soul with God.

Thus, rather than mourn the anniversary of Rumi’s death, his followers celebrate jubilantly.

Rumi was born in what is now Afghanistan in 1207 AD. When he was a boy, his family headed west during the Mongol invasions. He spent much of his life in the Rum area of Asia Minor (now Turkey) which is how he earned his nickname Rumi. At age 25, he became head of a madrasah, inheriting the post from his father.

Rumi’s poems speak to the oneness of the universe, a central component of Sufism, although they touch on many topics…

Rumi’s works and philosophy were spread by his followers and his son Sultan Walad, who founded the Order of Mawlawi Sufis, aka the Whirling Dervishes, the order that brought new meaning to the term “poetry in motion”

In Sufism, a branch of spiritual philosophy stemming from the Sunni tradition, one does not learn the deeper truths of God from books but from direct experience. To become a dervish, one must train for years under a master, then spend years humbly serving society.

The goal is to reach a state of fitra: separation from one’s ego to become one with Divine Unity.

Mawlana Jalal ad-Din Muhammad Balhi finally reached that long-awaited union 801 years ago today. Today his Urs is celebrated not just in Persia but by Sufis and poetry-lovers around the world.

If you bake bread with the wheat that grows on my grave
you’ll become drunk with joy and
even the oven will recite ecstatic poems.
If you come to pay your respects
even my gravestone will invite you to dance
so don’t come without your drum.
Don’t be sad. You have come to Gods feast.
Even death cannot stop my yearning
for the sweet kiss of my love.
Tear my shroud and wear it as a shirt,
the door will open and you’ll hear
the music of your soul fill the air.
I am created from the ecstasy of love and
when I die, my essence will be released
like the scent of crushed rose petals.
My soul wants to leap and join
the towering soul of Shams.

One Reply to “Urs of Rumi”