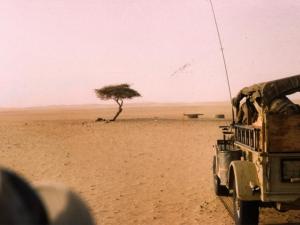 Standly quietly in the desert, L’Abre du Ténére was the only tree for 400 kilometers in any direction, earning the reputation as the most isolated tree in the world. It served as a natural lighthouse for travelers and traders crossing the Sahara.

In 1939 a team dug a neaby well to find out where the tree got its water. It determined the trees roots had to descend 35 meters to reach the source.

The Tree of Ténére was the sole survivor of a forest than once dominated the region. In fact this part of the Sahara was a fertile grassland, which ancient artworks depict supporting a multitude of animals. Ten thousand years of “global warming” entirely dried up the grassland.

Today 80% of Niger is covered by the Sahara desert. Most Nigeriens live in the southwest corner of the country, where a small stretch of the Niger River flows in from Mali on the west and out through Nigeria to the south.

For centuries the unusual path of the Niger River baffled European explorers, who assumed its source was an unchartered snow-topped mountain rather than from storm run-off.

Because of its remoteness, the Niger region–ancient domain of the Songhai–was one of the last casualties of colonization. The French, intent on linking their holdings from the Niger River to the Nile, subdued Tuareg resistance and confiscated tribal lands in 1922.

During WWII, the French found themselves similarly occupied, and the Vichy government gave Nigeriens the right to vote. On December 18, 1958, Nigeriens voted to become an autonomous nation within the French commonwealth. Full independence came two years later. December 18 is celebrated as Niger’s National Day.

Watching Nigeriens celebrate National Day, you’d hardly believe the title that the UN Human Development Index bestowed upon the nation in 2006: “Least Livable Country in the World.” Nigeriens are among the most resourceful and spirited people in the world. The nation has navigated for centuries though colonialism, coups, drought, famine and war for centuries.

It has few precious natural resources. No oil like its neighbor to the south, Nigeria. No diamonds like Sierra Leone. No ocean access. A new gold mine started production in 2007, which may help raise Niger’s GDP. The land-locked nation gained notoriety in 2003 for something it didn’t do with its most highly-safe-guarded natural resource: it didn’t sell yellow-caked uranium to Iraq, as U.S. intelligence once suspected.

As for the Tree of Ténéré, it stands no more. According to Henri Lhote, who observed the tree in 1934 and again in 1959:

“Before, this tree was green and with flowers; now it is a colourless thorn tree and naked. I cannot recognise it—it had two very distinct trunks. Now there is only one, with a stump on the side, slashed, rather than cut a metre from the soil. What has happened to this unhappy tree? Simply, a lorry going to Bilma has struck it… but it has enough space to avoid it… the taboo, sacred tree, the one which no nomad here would have dared to have hurt with his hand… this tree has been the victim of a mechanic…’

After hundreds of years of surviving the harshest desert conditions, the lone survivor of the Ténéré forest succumbed 14 years later, not to nature, but to the bumper of a reportedly drunk driver.