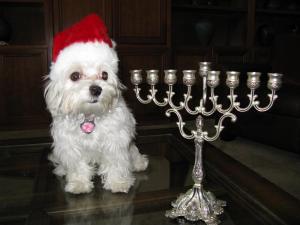 Hanukkah, or “Chanukkah” as those in the know call it, is one of the most misunderstood Jewish holidays. In fact, we don’t even know what “Hanukkah” means. Many believe it means “dedication”; others say it’s an acronym for “They rested on the 25th”. (Hanukkah starts on the 25th of Kislev.)

Hanukkah is a minor holiday in Judaism–in theory if not in practice–and isn’t mentioned anywhere in the Hebrew Bible.

That’s not to say Talmudic scholars haven’t argued about Hanukkah’s customs for ages (Whether, for example, celebrants should light one extra candle per night, or light eight on the first night and take one away each night). But the absence of holiday regulations in the Jewish Scriptures may have contributed to Hanukkah’s ability to adapt to various cultures of the Jewish diaspora.

After the death of Alexander the Great in 323 BC, the land around Jerusalem came under the power of the Seleucid Empire.

By the 2nd century BC, the Jews of and around Jerusalem were in the midst an identity crisis: whether to maintain their own religious traditions or to assimilate into Hellenistic culture. Many Jews in the cities were willing to adopt Greek ways. According to 1 Maccabees:

In those days there appeared in Israel men who were breakers of the law, and they seduced many people, saying “Let us go and make an alliance with the Gentiles all around us…Thereupon they built a gymnasium in Jerusalem according to the Gentile custom. They covered over the mark of their circumcision and abandoned the holy covenant…

Now back then the gym wasn’t Bally’s. It was the center of Greek social life, where men discussed topics of the day in the nude, a practice which went against Jewish law, and a place where Jewish men could not easily hide the 8th-day snip.

The Seleucid Emperor Antiochus set forth increasingly harsher restrictions on Jewish rituals, including the killing of newly-circumsized babies. He replaced the Jewish High Priest with his own puppet priest, turned Jewish temples into pagan ones, and eventually forbade the practice of Judaism altogether.

One religious leader known as Mattathias refused to make a sacrifice to a pagan god in the temple. When a Hellenized Jew attempted to make the sacrifice in his name, Mattathias killed the Jew as well as one of the king’s messengers. Mattathias then fled to the countryside with his 5 sons, and recruited traditionalist Jews to join his cause.

After Mattathias’ death, his son Judas “the Hammer” Maccabee (Maccabee means hammer) led a revolt against the Greek establishment. According to 1 Maccabees, despite being greatly outnumbered, Maccabee’s rag-tag crew defeated the opposing forces and re-consecrated the temple.

What’s up with the candles?

The miracle of the “Festival of Lights” was that the Jews only had enough oil to keep the temple’s sacred flame alight for one night. However, the flame stayed alight for eight days. For this reason, Jews continue to light an eight-candle “menorah” every year. The great Jewish philosopher Hillel won out on the menorah debate: Jews light one candle on the first night, and one more candle every night thereafter.

[One Jewish-Persian custom is to light eight candles the first night of Hanukah and eight more candles each additional night for a total of 64 on the eighth night, although we suspect this tradition was started by the Jewish-Persian candle-makers union.]

Hanukkah originally represented a victory of Jewish culture over assimilation into Greek culture. However, much of the importance that Hanukkah has today is the direct result of assimilation.

The observance of Chanukkah grew in importance during the 19th and 20th centuries in predominantly Christian nations such as the United States, as Jewish culture sought to adapt to the growing influence of of Christmas. Modern Hanukkah traditions such as gift-giving are borrowed straight from Christmas, which is of course celebrated around the same time of year, and which owes many of its own traditions to solstice festivals of the Greco-Romans. So in a sense, over 2000 years later, Greek influence is still going strong.

Hanukkah is a modern example of how holidays continuously change by synthesizing attributes of merging cultures. It’s the type of transition that took place countless times in ancient and medieval history, though detailed records of such transitions have all too often been lost to time or intentionally obscured.