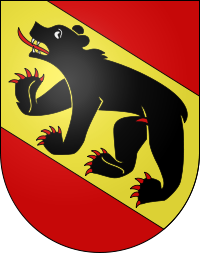 We made it to day 2 of the new year and the Swiss are already celebrating their second holiday.

Berchold’s Day, January 2, is named after Duke Berchtold V of Zahringen who founded the capital city of Switzerland in 1191.

Local legend goes that Bertchtold announced he’d name his future city after the first animal he slay on his hunting trip. He scored a bear, and thus the city is called Berne. (Good thing he didn’t kill a donkey.)

A duller theory is he named it “in memory of Dietrich of Berne (Verona), a favourite hero of Alamannic poetry.” (Names and Their Histories, Isaac Taylor, 1856″)

St. Brechtold’s Day is celebrated mostly in the area around Berne. Though the confederacy of Switzerland is 700 years old, each region has maintained their own culture and identity. Switzerland’s central location in Western Europe makes it the “melting pot” of very white people: French, German, Italian, and Swiss. So I guess it’s more of an assorted cheese wheel of cultures, since it hasn’t really melted yet.

…the second day of January is devoted to gay neighborhood parties in which nuts play an important part.

You know, I’m not even going to quote you the rest of that.

In early autumn children begin hoarding supplies of nuts for Berchtold’s Day, when they have “nut feasts.” Nut eating and nut games, followed by singing and folk dancing…One favorite stunt of the boys and girls is to make “hocks.”

Hocks are made up of five nuts—a pyramid with four nuts on the bottom and one on top—and apparently they’re harder to construct than you’d think. We don’t know why nuts are involved. Officeholidays.com theorizes that Berchtold really killed a squirrel.

Whatever the reason, there’s no better way to usher in the New Year than by breaking out some nuts, build those pyramidal hocks, and sing the national song of Switzerland:

O Great Berchtold
You killed a bear
You founded Berne
We stack nuts in your honor.