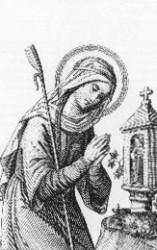 St. Genevieve became a nun at the tender age of 15 and devoted the rest of her life—another 65 years—to Christ. The secret of her longevity may have been her diet. She didn’t eat much more than barley bread and beans, and according to her biography, only twice a week, Sundays and Thursdays. She loosened this restriction at the age of 50 at the request of some bishops.

During the Hun invasion of what’s now France in 451, St. Genevieve’s prayers were believed to have prevented the Huns from attacking Paris; they headed toward Orleans instead. (Notice Genevieve is not the patron saint of Orleans…)

The following decade, during the lengthy Childeric siege on the city, Genevieve sneaked through a blockade to bring back much-needed grain to Paris’s starving citizens.

Death did not stop Genevieve from performing miracles. Parisians held a procession of her relics during the deadly plague of 1129 which killed 14,000 people. Spread of the disease ceased almost immediately, and many who were sick were reported to have healed upon touching her relics.

St. Genevieve’s saint day is January 3, but for centuries Parisians celebrated the anniversary of that first procession–November 26, 1129–with another procession in her honor.