If you’re like everyone I know, you had a baby this Fall.

But if you (or your loved one) are still expecting, you might want to give a shout out to Carmenta today, the Roman Goddess of Prophecy, Protectress of women in childbirth, and an early symbol of women’s lib.

Today marks the first day of Carmentalia, the Roman festival in her honor, observed by the women of ancient Rome.

This corresponds in name to the Latin Carmenta or Carmentis, of whom Preller says: The Goddess of Birth, Carmenta, was so zealously worshipped near the Porta Carmentalis, which was named from her, that there was a Flamen Carmentalis, and two calendar days, the eleventh and fifteenth of January, called the Carmentalia, devoted to her worship. These were among the most distinguished festivals of the Roman matrons. Etruscan Roman Remains<

She also bears much in common with Themis (below), the Greek Goddess of divine law and wisdom.

According to Ovid, she traveled from Greece to Italy with her son Evander, where Evander founded the city of Pallantium. Pallantium was named after their Greek hometown of Pallantium, Aracadia, and was one of the 7 hills that later became Rome.
Carmenta was famous for chanting her prophecies in verse. Her Greek name was Nicostrate, but when she arrived in Italy, the locals called the singing woman Carmenta, for the Latin ‘carmina’, or ‘song’.

Another explanation holds the opposite: Carmenta predated the Latin word for song, and ‘carmina’ derived from the prophetess’s name.
‘Mente’ meant ‘wise’ or ‘mind’. Car-menta could have meant ‘Car the Wise’. Or as Plutarch suggests, ‘Out of the Mind’, because she acted crazy.
She was associated with artistic and technological innovation and is co-credited for inventing the Latin alphabet (with Al Gore and her son Evander.) There is little evidence to support this, but Latin was indeed based on a Greek variant.

According to Virgil she used her powers of prophesy to choose the best site of the future Rome on which to establish her son. Once she even foretold Hercules the fate that awaited him.

How she came to be the Goddess of Childbirth is unclear. The women’s cult that grew around her was said to have predated Rome. However, Plutarch’s and Ovid’s description of the origin of her temple is more about contraception (and possibly abortion) than fertility. 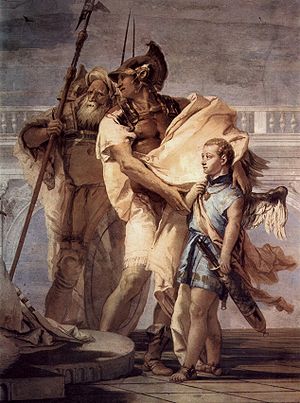 During the Second Punic War (215 BC) the Roman Senate restricted the rights of women to ride in carriages or to wear certain clothing. This was an attempt to save resources such as horses, fabrics, and gold for the war effort.

But when the war ended, these rights were not reinstated.
The women of Rome banded together and protested, the Lysistrata way. They refused to conceive children. (You can work out the details.) According to Plutrach they:

“kept their husbands at a distance until the husbands changed their minds and made the concession to them.”

After the laws were revoked, the women had numerous prodigy, and built the Temple of Carmenta in her honor.

At the temple the Goddess Carmenta could be invoked with one of two carmentes, lesser goddesses of childbirth, and Porrima–literally, “feet first” and “head first”. Possibly referring to which way the baby was delivered. It can also be read as “looking backward” and “looking forward,” citing Carmenta’s ability to tell the future.

All forms of animal skin were banned in her temple. This meant no shoes, no leather, and no animal sacrifice:

For on the day they had received life, they did not want to deprive another life.” –Varro, Cens. 2.2

The Carmentalia festival was unique in that it was celebrated on two separate dates, four days apart. (The second date was on January 15th.)

[The reason for this is uncertain. One theory is that it was originally on the 11th and 13th, but the 13th was the Ides of January. Or, as mentioned earlier, the Romans didn’t have anything better to do in the middle of January.]

Dictionary of Greek and Roman Antiquities