Today we celebrate the birthday of Benito Juarez!

So what the heck is Cinco de Mayo!?

Cinco de Mayo commemorates the Mexican victory over French forces at the Battle of Puebla in 1862. Which is when Mexico kicked their French booty all the way back to Paris.

Actually, no. Though the French lost the battle, they conquered Mexico City a year later and installed a puppet dictatorship under this Austrian dude:

So remind me, why on earth do we celebrate Cinco de Mayo like it’s the Mexican 4th of July?

Well, first of all, the Mexicans don’t. Only the Americans do, and the people of Puebla, Mexico. Mexican banks are open today, as are schools, government buildings and just about everything else. There are no ad campaign blitzes featuring Corona, and no parades outside of Puebla. The reason Cinco de Mayo is celebrated so vigorously in El Norte is one of North America’s greatest mysteries.

Though not strategically significant, the Battle of Puebla was a powerful symbolic victory for Mexico in the 1860s. The Mexican-American War in the 1840s and the Mexican Civil War a decade later bankrupted the country. To get Mexico back on its feet, President Benito Juarez declared a two-year moratorium on payment of foreign debts. Creditors England, Spain and France did not take the news well. They decided to get back their money the old-fashioned way: they invaded.

Juarez was able to reach agreements with Spain and England, which went on their merry way, but France had other plans. Napoleon III wanted to rule Mexico by proxy, perhaps to make up for that teensy land sale known as the Louisiana Purchase. 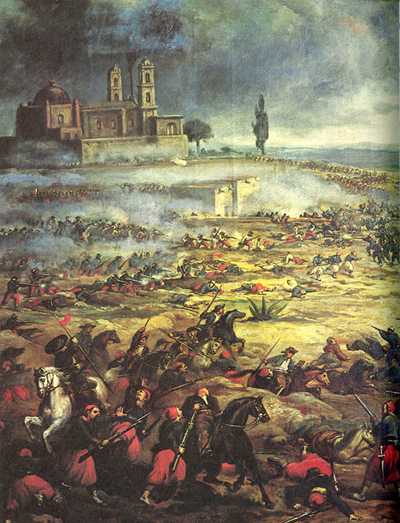 The overconfident French army set out for the Mexican capital assured of an easy victory. 6,500 well-trained French troops met up with under 4,500 ill-equipped Mexican troops under General Ignacio Zaragoza near the city of Puebla. The French were so certain of their success, they attacked Zaragoza’s forces at their strongest point. The result was catastrophic. Zaragoza’s troops suffered minimal losses while inflicting heavy casualties on the French, even chasing them in retreat.

The battle provided a much needed boost to Mexican patriotism and morale by proving that a nation still on training wheels could defeat a European power with one of the strongest armies in the world.

The reason the holiday is so important to Chicanos in the United States may be because the war against the French represented the first collaboration between Mexico and the U.S. since the Mexican-American War. Mexican-American societies from Texas to California supported their former homeland with volunteers, money, and supplies. The Vienna-born Emperor Maximilian was ousted in 1867, and Benito Juarez, the Zapateco Amerindian peasant-turned-priest-turned-lawyer-turned-President, became leader of Mexico once more. But that’s a story for another day.

One Reply to “Cinco de Mayo”