Flag of Mexico!
Legacy of our heroes,
Symbol of the unity of our parents and of our siblings,
We promise you to be always faithful
To the principles of liberty and justice
That make our Homeland
The independent, humane and generous nation
To which we dedicate our existence.

Flag Day is held on the anniversary of the creation of the Plan de Iguala in 1821, named for the city Iguala in which it was signed. The Plan did not end the War of Independence but paved the way for victory. It set forth three  ‘Guarantees’ or agreements of the future Constitutional Mexican government:

The call “Religión, Independencia y Unión” became the motto of the Mexican people, and the Plan led to the creation of national army, (the Army of the Three Guarantees) made up of the forces of Augustin de Iturbide and Vicente Guerrero.

Iturbide was one of the most colorful and important figures in Mexican history. 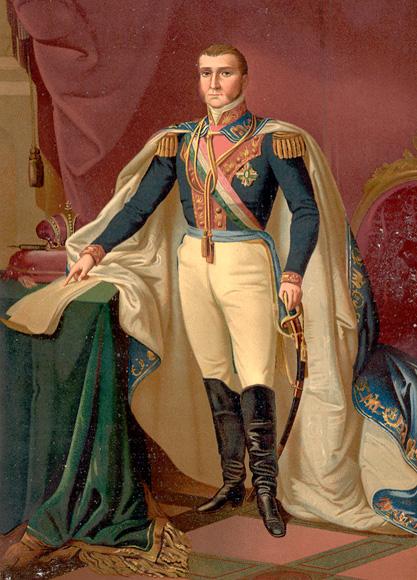 Born in Mexico, the son of a Spanish father and Mexican mother, he joined the Spanish army at age 15. By 27, when the war broke out, he was a lieutenant. By 33 he was the commander of Spanish forces of Northern Mexico. Then, in 1820 Iturbide did a remarkable thing: he did a complete about face and joined the cause of the Mexicans, taking most of his army with him.

Upon signing of the Plan de Iguala, Iturbide’s forces joined with those of Vicente Guerrero, future President of Mexico. The Treaty of Cordoba, signed by the Spanish Viceroy confirmed the establishment of an independent Mexico in late 1821.

In 1822 Iturbide was crowned Augustin I, Emperor of Mexico. Opposition to his military style government steadily grew. Forces under General Santa Anna forced Iturbide to abdicate and leave the country, with the understanding he would be executed upon setting foot in Mexico again. Mexico was declared a republic in 1823.

Iturbide traveled to Italy and London, but returned to Mexico in 1824, despite the threat of execution. Authorities made good on their promise. Iturbide was arrested in Tamaulipas and shot by law enforcement authorities in the nearby town of Padilla. He was 42.

The first Mexican national flag was adopted by the Decree of November 2, 1821 and confirmed two months later on January 7, 1822.

Its colors stand for:

The symbol of the eagle sitting atop a cactus devouring a serpent dates back to a timeless legend. The ancestors of the Aztecs wandered about Mexico for 200 years in search of a homeland. They had been told by the god Quetalcoatl that the site of their future home would be marked by an eagle perched on a cactus with a snake in its mouth. When they encountered such a scene they claimed the location as their homeland.

The site marks what is now Mexico City, one of the largest cities in the world.