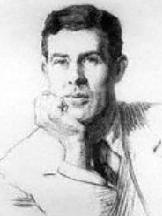 7/11 might be a more appropriate day to extol the virtues of poetry, but as it is, we’ll celebrate on 7/10, the birthday of poet, journalist, and author Edmund Clerihew Bentley, who created the most venerated form of poetry in all the English language: the Clerihew.

The Clerihew is a four-line verse where the end of the first line, or more often the full first line, is the subject’s name. Clerihews have an AABB rhyme scheme and meter is of secondary (or no) importance:

Even Steven
Will be leavin’
To get mugged in Chicago
After watching Dr. Zhivago

According to Steven Gale’s Encyclopedia of British Humorists, Clerihew composed the first such poem as a 16 year-old student in science class, in honor of a British chemist.

Sir Humphry Davy
Was not fond of gravy.
He lived in the odium
Of having discovered sodium.

Evidently the poem was a big hit with his fellow students, for he never stopped writing them. He published his first collection in his 1905 classic, Biography for Beginners. Other favorite clerihews include:

Sir Christopher Wren
Said, “I am going to dine with some men.
If anyone calls,
Say I am designing St Paul’s.

And from the Boston Globe’s Clerihew contest:

Edmund C. Bentley
Wrote intently,
But would now be anonymous
Were it not for the verse form for which his middle name is eponymous.

Clerihew was also a mystery author. He wrote one of the great detective stories of the early 20th century, Trent’s Last Case.

“Cupples, I have absolutely nothing left to say, except this: you have beaten me. I drink your health in a spirit of self- abasement. And you shall pay for the dinner.” — Trent’s Last Case, 1913

So before you go off and celebrate Clerihew Day with the reverence it deserves, remember,

Edmund Bentley
Evidently
Was born in the U.K.
On Clerihew Day