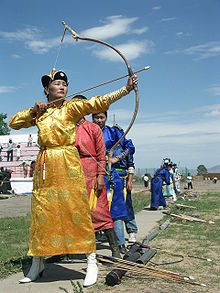 This week thousands of Mongolians gather to celebrate Revolution Day, July 11, and to compete in Mongolia’s biggest festival: Eriin Gurvan Naadam, or the Three Games of Men.

The “Three Manly Sports” as they’re called, are: Archery, Wrestling, and Horseback-riding. (Sorry guys, for whatever reason Ultimate Frisbee didn’t make the cut.)

“For 2,000 years, these three sports were not just entertainment, but a vital part of military training for the nomadic tribes of the steppes between Siberia and China.”  — Christian Roy, Traditional Festivals

Around a thousand years ago the three activities merged into the Naadam Festival. The historic games were a rite of strength and courage among the region’s nomadic warriors. In the 13th century Genghis Khan and grandson Kublai incorporated Naadam into the political ceremony of the newly unified nation.

The festival began to be celebrated every third year under the religious leader Zanabazar in 1641. In the 20th century the government moved the annual celebration to July 11 to commemorate the Mongolian Revolution of 1921.

Naadam means “to play.” Day One of the three-day festival begins with the Mongolian President’s inaugural speech and the impressive opening ceremonies, followed by archery and wrestling in Ulaanbaatar Stadium. The wrestling bouts are a sight to behold. According to journalist Ron Gluckman,

“The field is empty when the national anthem is chanted by the crowd. Then, without warning, hundreds of men suddenly toss aside robes, and scream madly as they bound down into the arena, stripped down to little more than leather boxing shorts.” — The Alternative Olympics

A wrestler is out the moment his elbow or knee hits the ground. Two full days of intensive bouts whittles the playing field down from 512 wrestlers to just two. There’s no division by size—the smallest wrestler can prove himself against the largest. Legend has it that a woman won one year, which is why the men now wear revealing tops. Wrestling is the only one of the three ‘manly’ sports in which women aren’t allowed to compete.

The archery competition involves Mongolia’s weapon of choice since the 12th century. The arrows are made of willow, vulture feathers, and bone, and bows are strung with bull tendons. Mongolians are proud to point out that their ancestors perfected the bow as a weapon, and that even back in 1224 AD, according to the ancient Stone of Genghis Khan, a Mongolian archer named Yesunke hit a target 536 meters away in a competition organized by Genghis himself.

Mongolians learn to ride horses before they can walk. According to the UB Post, back in the day the Naadam races included up to 45,000 jockeys. The races take place out on the open steppes. Children as young as 6 compete, as well as women, who often do so in stiletto heels. (Mongolian women love their stiletto heels. Even the policewomen wear them.) Finishing first in the race is no small honor. The winner gets to bow before the President of Mongolia.

After hundreds of years, Naadam is still a vital part of Mongolia’s national heritage. For three days, beginning on Mongolia’s national day, Mongolians celebrate mastery of the three skills that allowed a group of horsemen to conquer much of two continents.