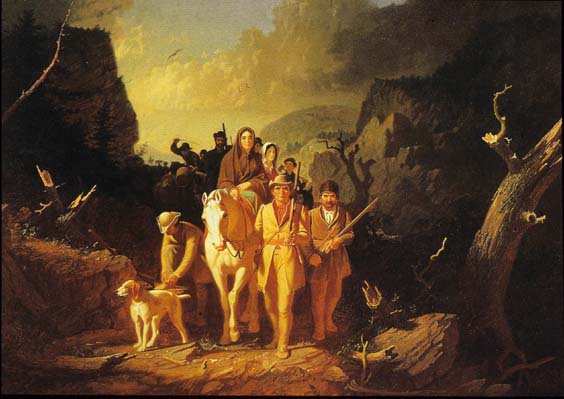 Daniel Boone was born on a mountaintop in Tennessee, greenest state in the land of the—wait no—mixing up my folk heroes here. Boone was born in Eastern Pennsylvania, not Tennessee, but like Davy Crockett he was indeed raised in the woods so he knew every tree. No record of when he killed his first bear, but he was an expert hunter/trapper by age twelve.

Boone had two siblings who scandalized the Quaker world by marrying “worldlings”, ie. non-Quakers. This scandal may or may not have contributed to the family’s decision to move further west to the Shenandoah Valley and then to North Carolina in 1751. He married Rebecca Bryan five years later, and fought in the French and Indian War.

Legend has it that an American beech tree in Tennessee still bears Boone’s handiwork. The pioneer supposedly carved “D. Boon cilled a bar [killed a bear] on this tree in the year 1760”. (www.inhs.illinois.edu)

June 7 was chosen as Boone Day because it marks the supposed anniversary of the pioneer’s entry into Kentucky in 1767.

Boone’s most famous trek may have been through 200 miles of Virginian wilderness to the Cumberland Gap, a journey immortalized by Caleb Bingham in his 1851 painting. Thousands of settlers later followed Boone’s path to make their way inland toward the Kentucky River.

Daniel Boone Day has been celebrated for over 100 years. The 1908 American Practitioner states that

“Daniel Boone Day will be one of the features of the week, during which there will be sewing bees, apple parings, corn huskings and old-fashioned dances.”

That Boone Day, however, was celebrated on June 15th.

By 1922, the Kentucky Historical Society extended a cordial invitation to readers and friends “to attend Boone Day exercises on June 7”, the traditional anniversary of the day in 1767 that Boone first explored the backwoods of what is now Kentucky.

[And no, despite his penchant for journeying out to the middle of nowhere, Boone had nothing to do with the term “Boondocks”. That comes from the Tagalog word bondoc, which means mountain and was brought to the U.S. by military personnel in the Philippines.]