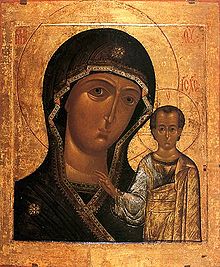 Dance with joy, O peoples!
Clap your hands with gladness!
Gather today with fervor and jubilation;
Sing with exultation.
The Mother of God is about to rise in glory,
Ascending from earth to heaven.

It’s called the Dormition, or the “falling asleep”. On its own, falling asleep might not sound like ample reason for a feast, no matter how much you like to sleep, but it’s a very big deal in the Orthodox Church. That’s because Dormition in this case refers to the departure from earth and subsequent ascension of Theotokos, ie. “god-bearer”, the Virgin Mary.

In Roman Catholicism, it’s known as the Assumption of the Virgin Mary. Although the Assumption is celebrated on August 15, in the Eastern Orthodox Calendar that equates to today, August 28th.

The Dormition is a major feast in Eastern Christianity, so major it’s preceded by a strict two-week fasting period. During the fast Orthodox Christians refrain from eating red meat, fish, poultry, and dairy products. The Feast of the Transfiguration falls right in the middle of the fast (How’s that for confusion?) during which time fasters are allowed to go wild and eat fish.

In early Christendom, the stories of life of the Virgin Mary after the crucifixion received far less play than those preceding the Annunciation…

Already by the second century, Christians had begun to circulate stories of the Virgin’s life before the Annunciation, but evidence of a similar concern with the details of her life after her son’s ascension does not emerge for several more centuries.

“The holy virgin may have died and been buried…Or she may have been put to death—as the scripture says, ‘And a sword shall pierce through her soul’…Or she may have remained alive, for God is not incapable of doing whatever he wills. No one knows her end.”

But by the eighth century monk John of Damascus wrote:

If her childbearing was remarkable and of saving worth for the world, surely her falling asleep was glorious, too—truly sacred and wholly worthy of praise. (Daley, 1998)

Between those epochs we have the foundation of the written history of the Dormition. According to Orthodox tradition, Mary died a natural death, the same as any mortal. Her soul was received by Christ. All the Apostles except Thomas were present at her death. Three days later, Thomas (always the odd man out) finally arrived and pleaded with his fellow Apostles to see her once more.

“We are all servants of the one Lord, Jesus Christ. How, then, is it that ye were counted worthy to behold the repose of His Mother, and I was not?…I beseech you, my fellow disciples: open the tomb, that I also may look upon her remains, and embrace them, and bid her farewell!”

But when they opened her tomb, her body had disappeared. “All that remained were her burial clothes, which emitted a wonderful unearthly fragrance.”

Like Son, like Mother. Mary’s body was resurrected and ascended into heaven on the third day after her death.

“Neither the tomb nor death had power over the Theotokos, who is ever watchful in her prayers and in whose intercessions lies unfailing hope. For as the Mother of Life she has been translated unto life by Him Who dwelt in her ever-virgin womb.”

— Feast of the Dormition