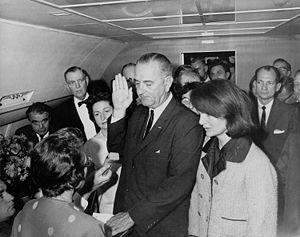 Today, the State (and former Republic) of Texas celebrates Lyndon Johnson Day, in honor of the 36th President of the United States.

Johnson’s five-year presidency was one of the most controversial and emotionally charged periods in American history—from the assassination of predecessor John F. Kennedy to the escalation of the Vietnam War to the Civil Rights movement. But what you may not know about the 36th President is that before entering politics, Johnson was a teacher.

“I felt about my students very much like I feel about my staff. I associated with them a lot socially. I would go into their homes and I would be with their family and would take them into my home, particularly the leading debaters and the ones that were on the teams. If they would take one side of a question I would take the other… I developed several better speakers—much better—than I was.”

LBJ worked in the Texas legislature during the 1930’s, and was elected to the U.S. House of Representatives during a special election in 1937. He won his Senate seat in 1948 and was elected as John F. Kennedy’s Vice-President in the 1960 election.

Three years later LBJ became the first and only President ever sworn in on Texas soil when Kennedy was assassinated in Dallas.

Johnson led the United States through one of the country’s most turbulent decades.

During his Presidency, Johnson strived to create a “Great Society” through such legislation as the Civil Rights Act of 1964 and the Voting Rights Act. He appointed the first African-American Supreme Court Justice, Thurgood Marshall. A social democrat, he pushed for a “War on Poverty”, but it was the War in Vietnam that would be his legacy.

In the Democratic New Hampshire primary in 1968, Johnson’s anti-War opponent won 42% of the vote, only slightly less than Johnson himself. Later that month, Johnson announced he would not run for another term.

Johnson returned to his ranch in Johnson City, Texas, where he died on January 22, 1973 just miles from where he was born, outside Stonewall, Texas.

The people of Texas celebrate the life of President Johnson every year on his birthday, August 27th.

“When I leave this job, I want to go back to right where I started in some college classroom and walk in at five minutes of eight and wait for the students to march in and sit down, and then start challenging them and provoking them and stimulating them and getting the best out of them for an hour. And then I am going to be sorry when the bell rings.”