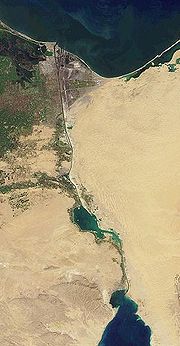 Egypt’s National Day is on July 23: Revolution Day. Revolution Day celebrates the day in 1952 that the Free Officers, led by the future Presidents Naguib and Nassar, forced pro-British Egyptian King Farouk to abdicate in favor of his infant son.

Despite the king’s abdication, the monarchy was not officially abolished that year. It was on June 18, 1953 that the new government declared Egypt a republic, and General Naguib became the republic’s first president.

Evacuation Day recalls the day back in 1956 that the last major contingency of British troops left Suez, after a 20-month period of withdrawing personnel, in accordance with a treaty arranged by Nassar and the British government in October 1954.

The Suez Canal was one of the most important feats of engineering of the 19th century. It allowed ships to travel between Europe and Asia without circling the entire continent of Africa. It was built by Egypt and France in the 1860’s. However Egypt incurred significant debt and was forced to sell her shares of the canal to the United Kingdom in 1875.

After attaining part interest in the Canal, Britain became more involved in the Egyptian government’s finances and politics. Finally during World War I, when the Ottoman Empire sided with the Central Powers, Britain declared Egypt a protectorate of the British Empire. Following a strong national movement, Egypt was declared an independent nation in 1922, but Egyptians choose to celebrate the overthrow of the king in 1952 and the evacuation of British troops four years later to mark the true beginning of Egypt’s autonomy.

After Western democracies withdrew funding for the Aswan Dam project, Egypt nationalized the Suez Canal in October 1956, leading to the Suez Crisis between Egypt and France, Britain, and Israel.

Evacuation Day, or Eid al-Galaa, is no longer a national holiday, but has been superseded by other victory days—Egypt’s Armed Forces Day marks the day in 1973 that Egyptian troops crossed back through the Suez Canal six years after the Six-Day War. April 25 celebrates the day in 1982 that Israeli troops pulled out of the Sinai peninsula.