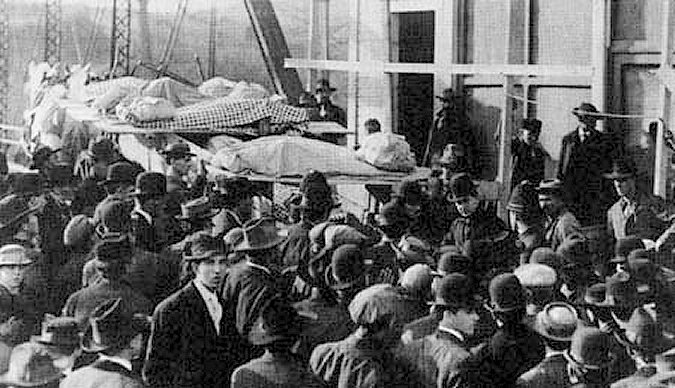 100 years ago the congregation of Williams Memorial Methodist Episcopal Church in Fairmont, West Virginia gathered to pay tribute to the 362 men, many of them fathers, killed at the Monongah Mine disaster of 1907. The victims were largely from poor immigrant families, Italian, Greek, Slav, Polish, and Russian. The accident left 250 women widows and over 1000 children without support.

The July 5 gathering was the suggestion of Fairmont resident Grace Golden Clayton. Clayton had been partly inspired by the first “Mother’s Day” celebration in nearby Grafton, West Virginia. But Clayton is not considered the mother of Father’s Day.

That title went to Sonora Smart Dodd, 3000 miles away in Spokane, Washington. As a teenager Sonora lost her mother who died in childbirth, leaving Sonora’s father to raise Sonora and her 5 brothers.

Sonora reflected on the role of fathers in the family during a Mother’s Day sermon in 1909. Thanks to Sonora’s efforts the governor of Washington declared July 19, 1910 the first Father’s Day.

However, unlike Mother’s Day, which went from a single West Virginia observance in 1907 to a national holiday in 1914, Father’s Day had a much harder uphill battle. The idea of Father’s Day was even mocked. In 1914 one New York Times reader wrote:

“Your correspondent of yesterday is quite right in his contention that the establishment of Mother’s Day argues for the appointment of Father’s day as well. It seems to me, however that he does not go far enough. I would suggest the following calendar:

The Father’s Day movement met with support during the Depression, when businesses hoped to foster a minor Christmas during the summer with a gift-giving holiday devoted to Dad. The support and observance of Father’s Day was augmented during WWII in honor of the fathers in the Armed Forces.

Two early proponents for the establishment of an annual Father’s Day were the National Father’s Day Committee in New York City, founded in 1926, and Harry Meek, of the Chicago Lions Club. Meek spoke around the country in support of the holiday, and suggested the date of June 20, his birthday, to observe it.

There was also a movement to call Mother’s Day “Parents’ Day”. This lost steam in the 1940s when

“The business community essentially had killed it. Mother’s Day followed by Father’s Day was too perfect a setup financially to allow something as gender-nonspecific as Parents’ Day to muck things up.” —“The Modernization of Fatherhood: A Social and Political History”

In 1924 President Calvin Coolidge proclaimed the first national Father’s Day, to “establish more intimate relations between fathers and their children and to impress upon fathers the full measure of their obligations.”

In 1956 a joint resolution of Congress recognized Father’s Day. President Lyndon Johnson signed a President proclamation to the effect a decade later. But it wasn’t until 1972 that President Richard Nixon established a permanent Father’s Day holiday on the third Sunday in June.

Incidentally, most of the N.Y. Times’ reader’s holiday suggestions did come to pass, and more, though not all dates are agreed upon: