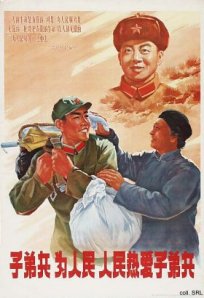 “A man’s usefulness to the revolutionary cause is like a screw in a machine. It is only by the many, many interconnected and fixed screws that the machine can move freely, increasing its enormous work power.”— from the Diary of Lei Feng

Since 1963, March 5th has been known as “Emulate Lei Feng Day” in China. Under Chairman Mao Zedong, schools would study Lei Feng’s diary, create Lei Feng teams to serve their communities, and teach children to be perfect citizens all around, all in the hopes of being just like the legendary Lei Feng.

Every afternoon we left school to “do good deeds like Lei Feng.” We went down to the railway station to try to help old ladies with their luggage, as Lei Feng had done…I stood on the street with an umbrella, anxiously hoping that an old lady would pass by and give me an opportunity to escort her home—as Lei Feng had done…

Who was Lei Feng?

Lei Feng was born into a poor family in Wangcheng, Hunan. He was orphaned at an early age, and taken in by the Communist Party. He started grade school just after the Chinese Revolution. After six years of school, he worked a number of ordinary jobs—a messenger for a local government office, a worker for the Anshan Iron and Steel Company; a truck driver in the People’s Liberation Army. During his service he was known for doing good deeds and donating part of his paycheck to social causes. Until one day at age 22, he died while helping a truck to back up.

So why was Lei Feng—one in a billion—chosen to be canonized by the world’s most populous nation?

In 1963 the babies of the Revolution of 1949 were hitting their teens. Born in 1940, the 20 year-old Feng was among the last generation that would recall life under the old capitalist regime of Chaing Kai-Shek.

Like millions of others, life before the revolution had not been kind to Lei. His father—according to Time Magazine—“was buried alive by the Japanese, his two brothers starved to death, and his mother hanged herself after being raped by a landlord.”

Lei Feng’s tragic life story entailed all the evils of pre-Communist China. The Japanese, the capitalists, the corruption, the landlords. After his mother’s death Feng was literally raised by the Communist party. One official write-up on Feng would bring this point home with the title: “My Mother was the Party.”

Another reason for Lei Feng’s posthumous popularity may have been the convenient existence of so many photographs of him doing good deeds. As Jung Chang pointed out, “Lei Feng’s good deeds were miraculously recorded by an official photographer.”

The book “Lei Feng Spirit” by Shi Yonggang states that government propaganda on Lei Feng started in 1960 when a photographer named Zhang Jun was assigned to do a story on a “model soldier who had donated 200 yuan to disaster relief.”

After his death, Lei Feng’s 200,000 word diary was published and schoolchildren were encouraged to study it. It includes such entries as “I am all for the Party, Socialism and Communism.”

“Gradually, during the course of 1964, the emphasis began to shift from boy scoutish good deeds to the cult of Mao. The essence of Lei Feng, the teachers told us, was his ‘boundless love and devotion to Chairman Mao.’ Before he took any action, Lei Feng always thought of some words of Mao’s. His diary was published and became our moral textbook. On almost every page there was a pledge like: ‘I must study Chairman Mao’s instructions, and be a good solider of Chairman Mao’s.'”

The final aspect of Lei’s life that allowed him to become the symbol of China’s youth was his death at age 22. In 1960s China, collectivity and conformity were the qualities of the day—hence the screw analogy. Feng’s death allowed him to break free of the conformity that bound his living compatriots. Not only would he be frozen in time as a young man, but there was no danger of him or his deceased family benefiting from his near sainthood. He was perfect symbol: young, selfless, loyal, and dead.

Reports of Lei’s death make it hard to separate the man from the myth.

“Lei died in the line of duty…”
“Lei died after being hit on the head by a wooden pole that was accidentally knocked over by a fellow solider.”
“Lei Feng: PLA soldier who died in a car accident…”

The truth may be a combo of all three. According to Qiao Anshan, the man driving the truck that killed Lei, he and Lei were cleaning the truck at Fushun Army base when Lei asked Qiao to back it up. “A rear wheel struck a pole from which barbed wire hung, but I didn’t realize this and hit the accelerator hard, pushing over the pole and killing Lei Feng.”

Lei Feng’s popularity has waxed and waned over the past 40 years, depending on political trends. He disappeared in the ’80s after it was noted that Feng wore a leather jacket and Omega watch—symbols of the Western bourgeois capitalism he was supposed to disdain. But he made a comeback in 90s during a government-led return to conservative communist values.

Today the Party has found a new way to get in touch with China’s youth: video games. One video game offers players the nail-biting adventure of following in the “Lei Feng Spirit”:

“For beginners, sewing and mending socks is the only way to increase experience and to upgrade,” said Jiao Jian, a six-grade pupil in Yuexlu District, quoted by the newspaper. “Every time you are promoted to a higher level, your clothes will become more average.”

World of Warcraft, watch out! 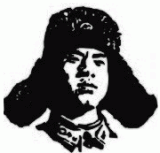