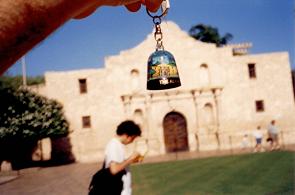 Not all states can boast their own Independence Day.  On March 2, fifty-four representatives at the Convention of 1836 seceded from Mexico by declaring that:

the people of Texas do now constitute a free, Sovereign, and independent republic, and are fully invested with all the rights and attributes which properly belong to independent nations; and, conscious of the rectitude of our intentions, we fearlessly and confidently commit the issue to the decision of the Supreme arbiter of the destinies of nations.

The document was drawn up literally overnight.

Why the rush? As the delegates met, a battle raged on in San Antonio.

About 189 Texians had barricaded themselves inside a former mission. Outside “the Alamo,” as it was called, 2000 Mexican troops under Mexican President Antonio Lopez de Santa Anna surrounded them. The Texians refused to surrender, and held out for two weeks.

On March 6 Santa Anna’s forces stormed the fortress. The Texians fought to the last man. Among the dead were Jim Bowie and Davy Crockett.  Santa Anna spared the life of a slave and a Mexican who claimed to be held prisoner; he also granted the surviving women and their children safe passage and provisions.

The battle, intended to crush the revolution, had the opposite effect. “Remember the Alamo” became the rallying cry of the new Republic, and six weeks later, on April 21, 1836 General Sam Houston defeated Santa Anna at the historic Battle of San Jacinto.

Texas remained independent for just under a decade. It became the 28th state in 1845; Texas’s annexation precipitated the Mexican-American War.

Ironically, the most cherished landmark in Texas was almost razed just prior to the battle. Sam Houston had asked Governor Henry Smith for permission to

“remove all the cannon and other munitions of war to Gonzales and Copano, blow up the Alamo and abandon the place, as it will be impossible to keep up the Station with volunteers, the sooner I can be authorized the better it will be for the country.”

James Neill and Jim Bowie however saw the strategic importance in holding the fort and wrote the Governor:

“Colonel Neill and myself have come to the solemn resolution that we will rather die in these ditches than give it up to the enemy.”

Neill left on February 17 to gather supplies and volunteers, unaware the battle would begin in just a week. Bowie held true to his word.

Just to be clear, the Texas Legislature wants you to know that Texas Week is NOT a holiday. Even though it is.

To ensure employers that workers wouldn’t use it as an excuse for time off, the proclamation also declared:

…under no condition, is Texas Week to be looked upon as a week of holidays; but on the other hand and quite to the contrary, it is hereby alleged that during Texas Week every citizen of this State is encouraged to work, insofar as he is able, and to do his work a bit better than he does it during other weeks of the year.”

The Battle of the Alamo