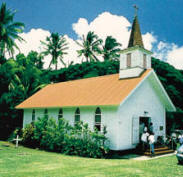 Here it’s been over a year and we’ve yet to celebrate any holidays devoted to Belgians. Today, April 15, ends all that. No, the Belgians didn’t invent taxes, but they did produce a priest by the name of Father Damien, and not the demon-exorcising priest of horror movie fame.

Our Father Damien was a very real, breathing human being from Flemish Brabant. He was born in 1840 and became a Picpus Brother in the Congregation of the Sacred Hearts of Jesus and Mary in 1860. In 1864 he was sent to the far off Kingdom of Hawaii where he served on the island of Oahu. And it’s in Hawaii, not in Belgium, that people celebrate Father Damien Day.

In the mid-18th century Hawaii underwent a horrible epidemic of several diseases, brought to the islands by foreigners—diseases to which the Hawaiian islanders had no immunities. Chief among these illnesses was the devastating and very contagious disease of leprosy.

King Kamehameha V established a colony on the island of Molokai where all those suffering from leprosy were quarantined. “Kalaupapa” was designed by necessity to be a self-sustaining colony, for few healthy people would go near it. However, because of the debilitating effects of leprosy, many of the inhabitants had difficulty farming and fending for themselves, and word spread of a Lord of the Rings society—wait, no—Lord of the Flies society developing there. (More anarchy, less hobbits.) The Church knew a priest should be sent to the island, but also knew such an assignment would effectively be a death sentence because of contagious nature of the disease.

In 1873 the 33 year-old Father Damien asked to be transfered to Kalaupapa and be priest to the lepers. There, Father Damien did more than pray:

“He washed their bodies, bandaged their wounds, tidied their rooms and made them as comfortable as possible. He encouraged those who were well to work alongside him by building cottages, coffins, a rectory, an orphanage for the children and repairing the road. He also taught them to farm, play musical instruments, and sing…Even before he was diagnosed as having leprosy he used the term “we lepers” in his sermons for he wished to identify with them as a means of bring them to Christ.” — Cathedral of Our Lady of Peace

Father Damien felt the first symptoms of leprosy in 1884. He continued working with the people of Kalaupapa another five years. As word spread of his deeds across the Christian world, much-needed donations and supplies finally flowed into the colony.

Despite all his deeds, Father Damien was not your steroetypical hero. He was derided by his detractors as “a coarse, dirty man, head-strong and bigoted.” (Reverend C.M.Hyde, 8/2/1889) In short, they say, he was no saint.

However, this October those detractors will be proven wrong. On October 11, 2009, 120 years after his death, Father Damien will officially become a saint in the Roman Catholic Church. He is the patron of those with leprosy and HIV/AIDS, and of ‘outcasts’.