Beware the Ides of April.

But the 15th of April is a day all Americans dread. It is, of course, Kim Il-Sung’s birthday. This guy was leader of North Korea from the time Truman was President all the way through to the Clinton Administration, and transformed North Korea into the thriving open-minded society it is today.

In addition to that, it’s Tax Day. That means if you’re headed to the post office—forget it, you should’ve left yesterday.

You’ll be glad to know you’re following in a well-established American tradition.

The first U.S. income tax was levied in 1861 to help finance the Civil War. It taxed 3% of net incomes over a whopping $600 a year. The income tax was dismantled eleven years later.

Harper’s ran this prophetic cartoon in 1878 during one of several proposals to reinstate the income tax: 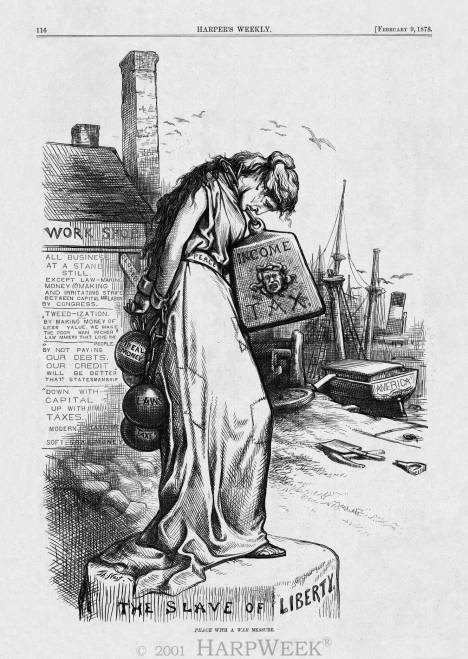 The Ron Paul Revolution of 1878

Income taxes were intermittently levied over the next three decades until the 1894 Wilson-Gorman Tariff Act attempted to claim a 2% tax on incomes over $4000. Opponents declared the act “unDemocratic, inquisitorial, and wrong in principle.” And the Supreme Court agreed, declaring the federal income tax unconstitutional.

“The Congress shall have power to lay and collect taxes on incomes, from whatever source derived, without appointment among the several States, and without regard to any census or enumeration.”

ie. Yours is Mine.

Yes, you have no 16th Amendment rights.

So whatever your taxes amount to, you can’t blame Connecticut, Florida, Rhode Island, Utah, Pennsylvania or Virginia. They’re the only states (of the 48 at the time) that never ratified the amendment.

Yeah, and New Mexico was not a state until 1912. Thanks New Mexico, thanks for your brilliant contribution. Really, we’re not bitter.

Can we get a recount?

One Reply to “Tax Day: Know Your 16th Amendment Rights”