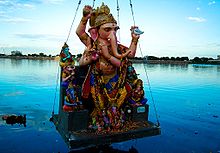 Today Hindus celebrate the birthday of the Colossus with the Proboscis, Lord Ganesh, aka Gajanana (Elephant-Faced Lord), aka Devendrashika (Protector of All Gods), aka Kaveesha (Master of Poets), aka Lambodara (Huge Bellied Lord) aka Vignavinashanaya (Destroyer of All Obstacles and Impediments) aka Akhurath (One who has Mouse as His Charioteer) or any of the other 101 names he goes by.

Ganesh is perhaps the most distinctive-looking deity of the Hindu pantheon. His birth was as unconventional as his profile.

While Lord Shiva was away at war, his wife Parvati sought to bathe herself, but feared someone might enter while she was vulnerable. To guard her door, she fashioned the model of a son out of clay or sandalwood paste, breathed life into him, and placed him outside with instructions not to let anyone in.

It just so happened that Lord Shiva came back from the battlefront while Pavarti was bathing. Ganesh didn’t know who he was and prevented Shiva from entering. Shiva, after a hard day of battling demons, was not in the mood to be stopped in his own house. With his sword he sliced Ganesh’s head clean off.

Needless to say, when Parvati came out of the bath to find her new son decapitated, she was quite perturbed with Shiva, and threatened to destroy the three worlds of Earth, Heaven, and Hell.

Like any good husband, Shiva instructed his men to go out and bring back the head of the first living creature they found. They came back with the head of an elephant, which Shiva placed atop Ganesh’s decapitated body and with a sacred breath, made him whole.

Ganesh became the great Protector, and also the bringer of good fortune and prosperity.

People celebrate Ganesh Chaturthi with a festival lasting ten to twelve days. Large and small clay and metal models of Genash are created for the festival, sometimes 20 feet tall. Sacred traditional foods are offered to the god, including lotus flowers, fruits, sweets, and prasadam. At the end of the ten days, Ganesh’s likenesses are taken in a procession to the nearest body of water and submerged.

These days most idols of Lord Ganesh are made with Plaster of Paris rather than clay. Unfortunately, this  creates a toxic hazard when thousands of idols are submerged in local rivers and lakes on the final day of celebration. Indian activists try to combat, or at least mitigate the pollution by encouraging observers to perform short, symbolic submersions, or to return to tradition, natural materials like clay.