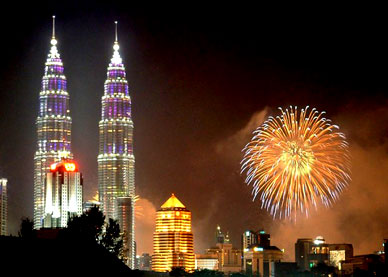 Until just a few years ago, it was home to the two tallest buildings in the world, the Twin Towers.

Its flag boasts over a dozen horizontal red and white stripes and a blue rectangle in the upper left corner displaying certain celestial objects.

It won its Independence from Great Britain.

Its head of state is the Yang di-Pertuan Agong, and its official religion is Islam.

The Malaysian flag contains 14 red and white stripes which symbolize the equal standing of the country’s 13 states and its federal government. The 14-point “Federal Star” represents Malaysia and its monarchy, while the yellow crescent moon represents Islam.

Though the official religion is Islam, Malaysia has significant populations of Buddhists and Hindus as well as a smaller Christian population.

And today is the biggest civic holiday of the year. Malaysians celebrate Hari Merdeka, (Independence Day), which marks Malaysia’s formation as a unified modern state and its independence from Great Britain over half a century ago, on August 31, 1957.