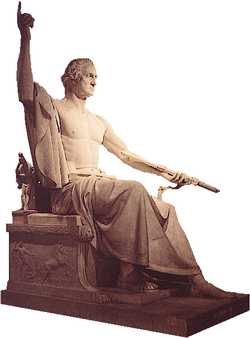 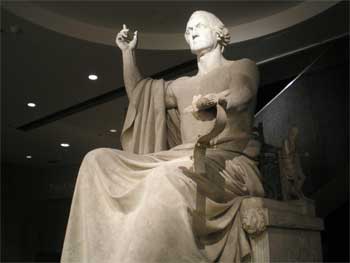 The tallies of the first presidential election in 1789, submitted by electors of 10 of the 13 United States of America, were as follows:

[Source: The Papers of George Washington: the Electoral Count for the Presidential Election of 1789]
So you see John Adams had 1 short of half as many votes as Washington. Why do we say Washington was elected unanimously?

Every single one of the 69 delegates across the 10 participating states voted for George Washington as one of their two choices. The remaining 69 votes were split among 11 other prospects as shown above. John Adams was unique among the 11 others in that he acquired votes not just from his own state (Massachusetts) and its neighbors but as far south as Virginia.

On April 30, 1789 George Washington was inaugurated President. The ceremony took place on a Federal Hall balcony overlooking Wall Street in New York City, the nation’s first capital. Ironically, New York was the one state that had ratified the Constitution but had not voted for Washington. Or anyone else. New York legislators had failed to pass an Election Act in time to select delegates to participate in the election.