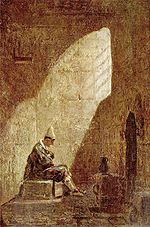 Don’t tell your co-worker he has dirt on his face; he’s been told this a dozen times already today, and it’s not dirt.

The ashes on his forehead, resembling the shape of a cross, most likely come from palms that were burned last year after Palm Sunday and were blessed by a priest. On the morning of Ash Wednesday, Catholic priests and some Protestant ministers mark their parishioners foreheads with the ashes, which symbolize both repentance and mortality.

“…till thou return unto the ground; for out of it wast thou taken: for dust thou art, and unto dust shalt thou return.” Genesis 3:19

Or as the Book of Common Prayer succinctly puts it: “Ashes to ashes, dust to dust.”

Ashes have symbolized repentance since the days of Moses, when Hebrews used the ashes of a burnt sacrificial cow for purification:

…A man who is clean shall gather up the ashes of the heifer… They shall be kept by the Israelite community for use in the water of cleansing; it is for purification from sin.” Numbers 19:2-9

Later, in the time of Esther:

“When Mordecai learned of all that had been done, he tore his clothes, put on sackcloth and ashes, and went out into the city, wailing loudly and bitterly.”  — Esther 4:1

Sackcloth and ashes often went hand in hand in the Scriptures.

According to  Questions on the Lessons, Collect, Epistle, and Gospel in the Sunday Morning Service of the Church (1847) by Reverend Thomas Jackson:

“The name of Ash Wednesday is derived from a custom that prevailed in the primitive Church, for penitents at this time to express their humiliation by lying in sackcloth and ashes.”

Though featured prominently in the Bible, sackcloth was no fashion statement. It referred to different fabrics over the centuries, often a coarse material made of goat hair. Whatever it was, it wasn’t comfy. Criminals were forced to wear it as punishment, and to signify their status to others. People also wore sackcloth for mourning and repentance.

“Such persons as stood convicted of notorious crimes were on this day excommunicated by the Bishop, and not admitted to reconciliation with the Church until after the most public testimony of sorrow and repentance, and the greatest signs of humiliation.” (Jackson, 1847)

The sackcloth-and-ash self-flagellation combo was firmly established by Jesus’ day. In the Gospel of Matthew, Jesus denounces cities in which he had previously performed miracles by saying:

“If the miracles that were performed in you had been performed in Tyre and Sidon, they would have repented long ago in sackcloth and ashes.”  Matthew 11:20-21

The Ash ritual became an annual event that marked the beginning of Lent sometime around the 7th century. Forty days before Easter, sinners were denounced and temporarily excommunicated. They were cast out, like Adam and Eve from Eden, and forced to live apart from their families and the parish for 40 days, hence the root of our word quarantine (“40 days”).

It’s actually 46 days between Ash Wednesday and Easter. The “40” days don’t include Sundays.

During the Middle Ages the emphasis on repentance shifted from from sins against the public to internal sins against God, a theme that is still at the heart of period known as Lent.

One Reply to “Ash Wednesday”