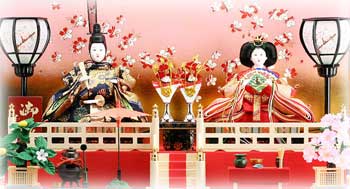 But no, your old “Tickle Me Elmo” and Molly McIntire won’t cut it. These dolls are often handed down from generation to generation, and are displayed in a very ritualized manner once a year.

A full set of “Hina Ningyo” dolls can cost anywhere from $400 to $10,000, and consists of roughly 15 pieces—“figurines” may be a more accurate term. The main two dolls are the O-Dairi-sama and O-Hina-sama, an Emperor and an Empress/Princess, both dressed in fine silk.

The other figures include

Tradition dictates that prior to the third day of the third month (March 3) families of young girls set up the dolls on a tiered platform covered in a bright red cloth.<

On the top step sits the Royal Couple.

On the next step are the 3 kanjo with banquet trays.

And displayed on the lower steps stand the figures of musicians, ministers, guards, and servants, as well as miniatures of household furnishings and two toy trees. (see photo)

The holiday is also called Momo no Sekku, meaning Festival of the Peach. In the old calendar the day coincided with the blossoming of the peace trees in Japan.

An example of Hina Matsuri is shown in Akira Kurosawa’s Dreams:

Part I: The Peach Orchard

“…Doll Day is for the Peach Blossoms. It is to celebrate their arrival. We dolls personify the peach tree. We are the spirits of the trees, the life of the blossoms…”

In American culture there is no equivalent to Hina Matsuri, but it might be compared to a chess set meets a nativity scene, although the dolls do not refer to any specific personages.

Written references to the holiday date back a thousand years. It grew out of the belief that these human representations could absolve oneself from sin. Traditionally, people would make dolls of folded paper or straw, rub them against oneself, and set them in the water, to carry away their sins with the tide. Even today many towns in Japan carry on this tradition.