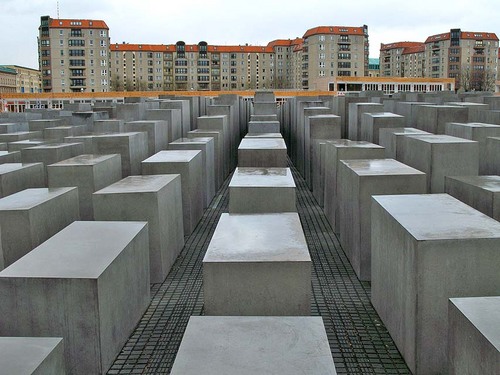 Today the UK and Germany remember the Holocaust of World War II when 6 million Jews were killed in concentration camps across Europe, along with untold numbers of Roma, communists, homosexuals, the mentally and physically handicapped, and political prisoners.

January 27th marks the anniversary of the liberation of the Auschwitz-Birkenau concentration camp. It is estimated that as many Jews were slaughtered at this one camp than remain on the entire European Continent today.

To this day the Jewish population has never reached its pre-1939 numbers.

It’s easy to be tolerant in times of prosperity.

In better times Hitler may not have appealed to the Germans. But in times of scarce resources the search for a scapegoat as a possible way out was too appealing. The illusion Hitler sold was that Jews were responsible for the recession. The reality was that the seizure of Jewish assets and property meant “free money” for the rest of the nation. It was an offer too good for the Germans to pass up, even if it meant the “dehumanizing” of a minority.

Could it happen in America?

It would take a major catastrophe.

In the days after 9/11, though not widely reported in American media, hate crimes were committed against Muslims for no reason other than their religion. A Sikh man in Arizona was killed simply because he looked Muslim.

The nation waited for the speech in which the President made it clear to the public that Muslims in America are Americans, entitled to the same rights of life, liberty and the pursuit of happiness. And that violence against anyone based on their religion is contrary to the American way of life.

The speech never came. In the crusade against evil, preventing hate crime was not on the top of the agenda.

The weapons of hate aimed at one minority today can and will be used more effectively against others tomorrow, whether they be Jewish, Muslim, Hispanic, Mormon, Catholic, Socialist, or Scientologist…<

As a pastor in Germany once wrote:

His obituary reads: Suharto Leaves Legacy of Stability in Region. In some places ethnic cleansing still falls under stability.
And “Never Again” is an ongoing struggle.

What is Holocaust Memorial Day?