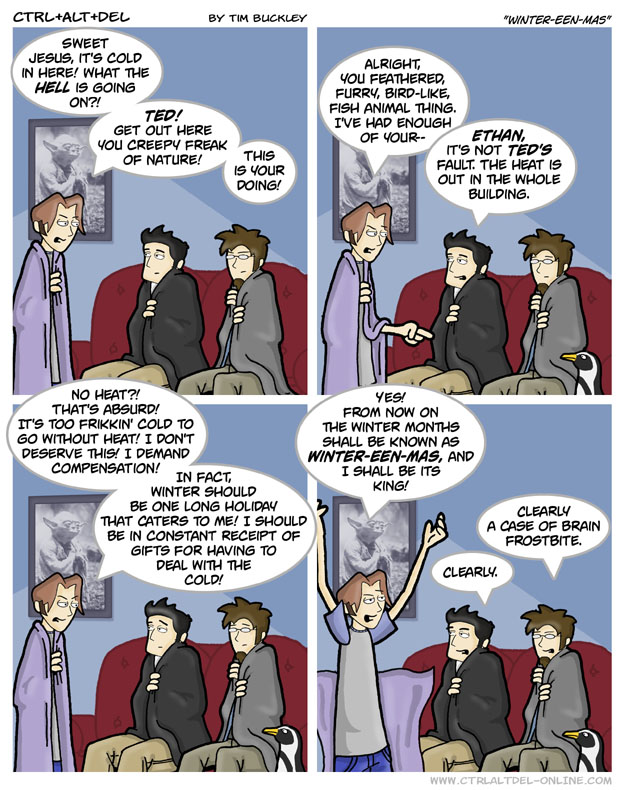 Winter-een-mas is a secular holiday devoted to gaming. The holiday spans the last week in January.

It is celebrated by 14 million people in 32 countries.

(Not really, just made that up.)

Actually it is celebrated by video game addicts, mostly males in their 20s, in the United States, Canada, the U.K., and Japan.

It is sort of the video game world’s Festivus, a holiday alternative to Christmas, publicized by the TV show Seinfeld.

Winter-een-mas originated from Tim Buckley’s comic strip Ctrl+Alt+Del, in which the character Ethan, upset when the heat goes out during a snow storm, makes the following realization:

“In fact, winter should be one long holiday that caters to me! I should be in constant receipt of gifts for having to deal with the cold! Yes! From now on the winter months shall be known as Winter-een-mas, and I shall be its king!”

Eventually Ethan is talked into shortening the holiday to one week.

Winter-een-mas has been celebrated by Ethan and video gamers across the world every year since 2003.