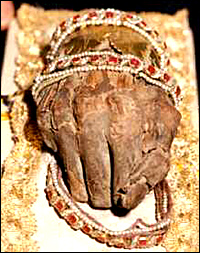 Today Hungarians honor the founder of their nation. Over a thousand years ago King Stephen (that’s Saint Stephen to you) was crowned King of Hungary. Though a saint, King Stephen was not someone you’d want on your bad side. He once killed an opponent by having his eyes gouged out and pouring molten led into his ears. And that was his cousin.

The whole molten-ear thing aside, he was considered a pious king, who imbued his dominion with Christian principles and established a Hungarian state very similar to the one still in existence. Even then Hungary was a multicultural nation, which the king encouraged:

“Foreigners coming from different countries and places to settle here bring with them a variety of languages, customs, instructive matters, and arms, which all contribute to adorn and glorify the royal court…A country speaking but one language, and where uniform customs prevail, is weak and fragile.”

King Stephen’s words have survived to this day. He once wrote to his son Emeric:

“Thou hast been brought up amidst delights and treasures, and knowest nothing of the arduous labors of war and the perils of hostile invasions by foreign nation, in the midst of which nearly my whole life has been passed.

The time has arrived to leave behind thee those pillows of luxuriousness which are apt to render thee weak and frivolous, to make thee waste thy virtues, and to nourish in thee thy sins…

…Rule over [thy subjects] peaceably, humbly, and gently, without anger, pride, and envy, bearing in mind that all men are equal, that nothing exalts more than humility, nor is there any thing more degrading than pride and envy.”

He forgot, however, to pass on the most valuable wisdom a parent can offer a child: “Ease off the boar hunting.”

Emeric was killed in a boar hunt accident in 1031–according to legend, on the same day he was set to inherit the kingdom. King Stephen never fully recovered from the loss.

For a man so blessed in other arenas, Stephen had poor fortune when it came to progeny. The father of the nation had no children of his own to take over the crown.

He died on August 15, 1038. His saint day is the following day in the Roman Catholic church: August 16. However, the Hungarians honor him on August 20–the anniversary of the date his remains were brought to Buda. It turns out that not only were Stephen’s words, his Christian piety and his principles preserved, so was his hand.

His right hand. And each year on St. Stephen’s Day Hungarians line the streets as the king’s surprisingly well-preserved 1000 year-old right hand is paraded through the capital.