Before you grab your towel and get undressed, no, this has nothing to do saunas or back rubs, so put your pants back on. This is a family blog.

No. Spas in Russian means “savior”. The ‘Spases‘ are three folk holidays celebrated in August, that bring the Russian summer season to a close with style. And food.

August 14 (Gregorian) is mokryi Spas, or “Wet Savior”, but is more commonly referred to as Honey Spas (medovyi Spas), so named because it coincides with the late-summer gathering of honey.

The second, and most important of the three takes place today. Spas na gore/iablochnyi Spas, aka, “Savior on the Hill”/”Apple Spas”. 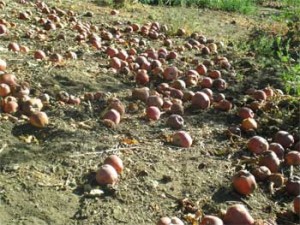 Apple Spas falls during the Feast of the Transfiguration in the Eastern Orthodox Calendar (August 19, Gregorian; August 6, Julian). Fruits and veggies from orchards and gardens are blessed today, and it’s considered bad luck to eat apples until now. More specifically, children in heaven are said to receive apples to eat this day, only if their living parents have not done so before Apple Spas.

The Spas developed out of agrarian festivals during which the first spoils of the harvest were consecrated in honor of nature deities, in the hopes of a bountiful harvest and mild winter. Over the centuries the folk festivals became inextricably intertwined with Christian traditions.

The Apples Spas coincidentally falls on the anniversary of the start of the 1991 coup in which Soviet leader Mikhail Gorbachev was kidnapped by hard-liners who disagreed with his reformist policies. The coup failed, and within days, five Soviet republics had declared their independence. By the year’s end, the 75 year-old Soviet Union had ceased to exist.