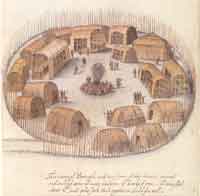 There sang a mother to her babe–
A mother young and fair–
“No flower like thee adorns the vale,
O sweet Virginia Dare…

Whatever Became of Virginia Dare?

On this day in 1587 the first child of English parents was born in America. Virginia Dare was the daughter of Ellinor and Ananias Dare, and granddaughter of John White, governor of the colony known as Roanoke in what is now North Carolina.

History texts record Ananias as both a former bricklayer from London and as an “aristocratic young man.” He was one of the Governor’s Assistants, in addition to being his son-in-law.

We only know about Viriginia Dare’s existence because shortly after her birth and baptism, her grandfather John White left the colony for England to seek materials and support. The journey took six months, during which time he encountered pirates, bad weather, and a near shipwreck, before finally landing–not in England, but Ireland.

When he finally returned to the colony in 1591, all trace of the colony, including his daughter and granddaughter, had disappeared.

To this day, whatever became of the “Lost Colony” of Roanoke remains a mystery. Virginia Dare has been the subject of historians and novelists, and the inspiration of poets and other artists in America for 400 years. From the poetry of Lydia Howard Sigourney to TV’s Buffy the Vampire Slayer. Today, inhabitants of Roanoke Island celebrate the 423nd birthday of Virginia Dare and ponder the fate of America’s first colony.

He calls–he shouts–the cherished names,
But Echo makes reply.
“Where art thou, Ellinor! my child!
And sweet Virginia Dare…”

2 Replies to “Birthday of Virginia Dare”