Over a hundred years ago today 15,000 women in New York City came together to march for better working conditions and universal women’s suffrage.

The following year the Socialist Party of America declared February 28 to be National Women’s Day. In Copenhagen in 1910 an International Women’s Day was proposed and unanimously agreed upon by 100 women representing 17 countries. It would be observed simultaneously by women around the world on March 8, 1911.

Over a million people observed the first International Women’s Day in countries like Austria, Germany, Switzerland and Denmark.

In 1917, International Women’s Day played a significant part in one of the most important revolutions of the 20th century: the February Revolution, which took place in, of course, March.

Before 1918, Russia was still on the Julian calendar, so Russians observed Women’s Day on February 23 Julian to coincide with the March 8 observances in the rest of the world. On February 23 (Old Style), 1917 thousands of women demonstrated in St. Petersburg, Russia, demanding “Food for our Children”, and for the return of their husbands and sons from the war with Germany. These massive demonstrations and strikes served as the catalyst for the series of events that led to the abolishment of the centuries-old Russian Czardom one week later, and paved the way for Bolshevik Revolution. 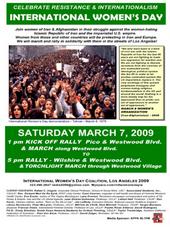 Over the past century International Women’s Day has served as a day to address issues of women’s rights in countries around the world, notably the developing world and Europe. The holiday has not garnered as near as much of a following in North America, perhaps because of its communist roots.

This year [2009] Every Day’s a Holiday attended the International Women’s Day Rally in Westwood, California. A Communist Rally “in the heart of Capitalism” as the speakers put it.

Having just finished reading Jung Chang’s Wild Swans: Three Daughters of China I was dubious about communism being the most ideal route for women’s equality. The book tells the story of three generations of Chinese women, focusing on the author’s mother, who joins the Communist Party in post-war China because it appears to be the best means to bring about long-overdue equality to women. However, once in power, the Communist Party creates an even more brutal and powerful aristocracy than the one it disbanded. The author’s family witnesses party policies that kill tens of millions of men, women, and children, and ruin the lives of millions more families, in the stated aim of achieving a more just society.

Regardless of political and economic ideology, today International Women’s Day fills a purpose long abandoned by another holiday: Mothers’ Day.

The original intention of Mothers’ Day in the United States—as conceived of independently by Julia Ward Howe and Ann Jarvis—was a day for mothers to join together to act as a collective force for social justice.

Having witnessed the brutality of the Civil War, both women sought to bring mothers together on Mothers’ Days of Peace to declare war on war itself.

“Arise then…women of this day! Arise, all women who have hearts! Whether your baptism be of water or of tears! Say firmly: “We will not have questions answered by irrelevant agencies, our husbands will not come to us, reeking with carnage, for caresses and applause. Our sons shall not be taken from us to unlearn all that we have been able to teach them of charity, mercy and patience. We, the women of one country, will be too tender of those of another country to allow our sons to be trained to injure theirs…”

The Mother’s Day we celebrate today in the United States is quite different. It was pioneered by Ann Jarvis’s daughter, Anna Jarvis, after her mother’s passing. Anna conceived of the holiday, not as a day of social activism, but as a day of recognition and gratitude for one’s own mother. And by placing the apostrophe before the ‘s’ rather than after, Mother’s Day became a very personal day rather than a collective one.

And far more commercial. Mother’s Day is a bigger day for the flower industry than even Valentine’s Day.

The greeting card companies haven’t yet figured out how to commercialize upon Women’s Day’s 100 year old tradition of social activism. But give it time.

Likewise, as the holiday grows more mainstream, the creators of Women’s Day rallies have yet to rediscover how to turn the date into one of social revolution.

Southern California native Cindy Sheehan, whose son Casey was killed in the Iraq War, was on hand at the Los Angeles rally to deliver an address to the crowd on Westwood Blvd. Appealing to a more targeted audience than Obama’s “Yes We Can” campaign, her credo was the more direct: “What the F***?”