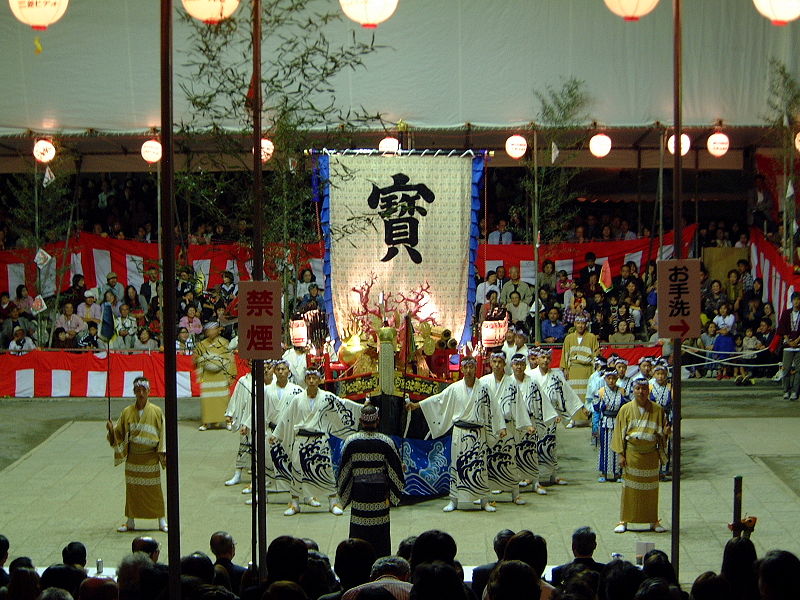 The Nagasaki Kunchi Festival, or O-kunchi Matsuri is celebrated from October 7th to October 9th every year. Kunchi means ninth day—ku nichi. The autumnal festival includes magnificent parades and processions, but what it’s world-famous for is its show-stopping dance-travaganzas performed over the three days across the city with its center-point at the Suwa Shrine. Imagine “Nagasaki’s Got Talent,” except instead of performing as individuals or pairs, the city’s proud boroughs, or machi, face off in elaborate communal group dances. The routines, each lasting about a half hour, can include massive, intricate floats and moving props, beautiful costumes, and brilliantly choreographed moves, all centered around a cultural or historical theme, each neighborhood showing its pride and out-doing the others. The show is televised nationally.

Sources say the festival itself was the result of competition—religious competition. Back in the 1500’s, Nagasaki’s position in the southwest of Japan made it an ideal landing spot for Portuguese and then Dutch navigators and traders making their way from India. Along with the traders came the missionaries, and Nagasaki became an early Christian stronghold. During the reign of Tokugawa Hidetada (r. 1605-1623), Christianity was persecuted, and the Suwa Shrine was built in 1614 as the focal point of the Shinto revival in Nagasaki.

Of course, shrines alone don’t win converts, or de-converts for that matter. To compete with the Christian Easter processions, Nagasaki’s O-kunchi Matsuri was established in 1634. One of its original intents was to root out Christians, but by the 1690’s even the Dutch had box seats to the celebration.

One of the set pieces of the festival is the ancient Dragon Dance, stemming from the Chinese New Year’s tradition. Even back in the 17th century, Nagasaki boasted a large Chinese population. Dance routines and performances often give a shout out not only to Nagasaki’s Japanese heritage but to its multicultural past.

In August, Nagasaki is home to one of the country’s most moving commemorations. Just seven decades ago, Nagasaki was virtually incinerated by the world’s third atomic explosion at the end of World War II. Miraculously, the Suwa Shrine survived intact. Every year on August 9, residents gather at the Suwa Shrine on the anniversary of the bombing to remember the 70,000 townspeople killed in the attack.