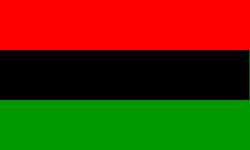 God makes three requests of his children: Do the best you can, where you are, with what you have now.

Originally intended as an Afrocentric alternative to Western holidays in the United States, Kwanzaa is now celebrated by people of African heritage in Europe and the Caribbean as well as by millions in Africa itself. The term Kwanzaa comes from the Kiswahili phrase “ya kwanzaa” meaning “first fruits.” The name refers to the ageless African tradition of harvesting the first fruits of the season. According to afriqueonline.com, “Kwanzaa is a time of year for black people to come together to celebrate the fruits of our labor during the past year.”

And perhaps most important: Nguzo Saba.

Nguzo Saba means Seven Principles, or Seven Reasons. The week-long celebration of Kwanzaa emphasizes one of the seven principles each day.

The Nguzo Saba are the “minimum set of values African Americans need to rescue and reconstruct their lives in their own image and interest and build and sustain an Afrocentric family, community and culture.” — Kwanzaa founder Maulana Karenga

On the first day of Kwanzaa African-Americans celebrate Umoja, or “unity”. It is the foundation of the seven Nguzo. Politicians often call upon “unity” as a slogan in the national arena, yet the concept of unity is overlooked within our communities and within the family.

Unity of the family is the building block of Umoja. It means unity of father and mother as role models for their children, and respect for one’s elders. Karenga notes that in many Western societies the elderly have been cast aside “leaving them with only failing memories.” African communities utilize the experience of their elders as judges and conflict resolvers. Their participation benefits both the society as a whole and the elders themselves.

A central purpose of Kwanzaa is to teach the younger generation about traditions that were passed down by Africans for countless generations, but were violently torn away during the slave trade and slavery. Marcus Garvey wrote:

A people without knowledge of their past history, origin and culture is like a tree without roots.

Umoja extends from family to community, from community to nation, and from nation to race. Applying the concept of umoja to the entire race is a difficult challenge. The African continent is home to over 50 nations. Each of these nations has not only its own ethnic identity, but several, often competing identities. And attempting to apply umoja to the entire continent and to all those descended from it is nothing less miraculous than uniting the entire planet.

But the principle of umoja is a practice as well as a principle. And the practice of umoja begins at home, one family at a time.

Tomorrow we celebrate the principle and the practice of Kujichagulia: Self-Determination…

Up you mighty race: accomplish what you will.