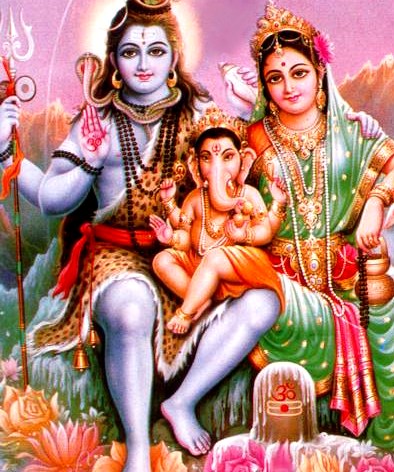 Give it up to Shiva today. The new moon of Phalgun (that’s today) is known as Maha Shivaratri in the Hindu religion. To the adherents of Shaivism, who worship Shiva as their primary god, today is the holiest day of the year.

Shiva gets a misleading rap as The Destroyer. It sounds cool and daunting, but is only half accurate. Being the Destroyer, Shiva is also the agent of transformation and dissolution that makes recreation possible.

Shiva’s often pictured as blue.  One time Indra was trying to regain his wealth and prosperity—taken by an angry sage. Brahma suggested churning the Ocean of Milk to create the “Nectar of Immortality.” But during the churning of the Ocean, a great poison called Halahala was released, deadly to all living things upon the earth. Shiva was summoned to save the world by drinking the Halahala. He wasn’t killed, but his throat became permanently blue.

Shiva is one part of the Hindu triumvirate. The other two parts are Brahma, the creator of the universe, and Vishnu, the preserver of it.

Today is considered by many to be the day Shiva married Parvati.

Shiva is at times ascetic, at others hedonistic. When Shiva was in one of his ascetic moods, Parvati tried seducing him but with little luck. The god of desire, Kama, was sent in on Parvati’s behalf to lure Shiva from his asceticism and ignite his more lustful side. Kama used the sounds and scents of spring at her disposal. It worked, but Shiva repaid Kama by burning him to ashes with his middle eye. [Caveat Matchmaker!] Shiva and Parvati were later married in a grand celebration. Kama was resurrected when Shiva embraced Parvati, and the sweat from her body mixed with Kama’s ashes.

According to legend, “their lovemaking is so intense that it shakes the cosmos, and the gods become frightened. They are frightened at the prospect of what a child will be like from the union of two such potent deities.”

The couple have a child named Ganesha, pictured with the trunk of an elephant. The three are often pictured together. Shiva and Parvati reflect the perfect balance of the universe. Parvati represents harmony in nature and the power to create and nourish.