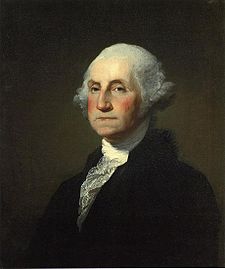 “A federal statute officially designates the holiday  as ‘Washington’s Birthday,’ reflecting the desire of Congress specially to honor the first president of the United States.” — 5 U.S. Code, Section 6103

The United States government honors three individuals’ birthdays with their own federal holiday. Who are they?

Yes, the picture above was just to fool you. Lincoln didn’t make the cut. [And Columbus Day remembers the date Columbus landed in North America, not Columbus’s birthday.]

…even though the third Monday in February can never fall on February 22.

The first year the Uniform Monday Holiday Act took effect was 1971. That year “Washington’s Birthday” holiday fell on February 15, closer to Lincoln’s Birthday (February 12) than Washington’s. Henceforth, many states, cities and companies which formerly recognized Lincoln’s Birthday on a local level decided to forego it in favor of a joint “Presidents’ Day” honoring both.

On the national level, “During the 1998 restyling of the Federal Rules of Appellate Procedure, references to ‘Washington’s Birthday’ were mistakenly changed to ‘Presidents’ Day,'” according to the U.S. Code.

So that year Congress reiterated that:

“A federal statute officially designates the holiday  as ‘Washington’s Birthday,’ reflecting the desire of Congress specially to honor the first president of the United States.” — 5 U.S. Code, Section 6103

Is George Washington miffed about sharing his birthday with another Prez? Or about it never being celebrated on his actual birthday?

It’s all a moot point, because George Washington was not born on February 22.

Nope. Despite the fact that the country has celebrated February 22 as Washington’s Birthday since the end of the 19th century, George was in fact born on February 11.

In 1752, when George was 20, Britain and all its colonies transfered from the Julian to the Gregorian calendar, as much of the rest of Europe had already done.

Part of the switch entailed a one-time chucking of 11 days from the calendar, in order to make up for 11 extra leap days that had piled up over the past 15 or so centuries.

Washington chose to recognize the Gregorian equivalent of his birthday, February 22, instead of February 11, as his legal birthday, just as the anniversaries of many pre-1752 dates had to be adjusted 11 days to reflect the new reality. [Yeah, Y2K had nothing on Y1752.]

Personally, I think we should go back to George’s Julian birthday and celebrate his birthday and Lincoln’s on February 11th and 12th. That’s right, a four-day weekend for the hard-working American people.

My friend who’s a Congressional aide tells me another holiday will never fly at the Capitol. But if countries like Germany and Australia can give workers 6 weeks off for vacation, I think each of our two greatest Presidents deserves a little celebration of their own…

Legal Holidays of the United State of America

By George, it IS Washington’s Birthday! – History of Presidents’ Day