In the United States the May tradition of honoring the dead of wars past began after the Civil War. In individual towns in the South, women would lay flowers and wreaths atop the graves of their husbands, fathers, brothers, and sons.  It was called Decoration Day. The song “Kneel Where Our Loves Are Sleeping” was published in 1867 with the dedication “to the ladies of the South who are Decorating the Graves of the Confederate Dead.” 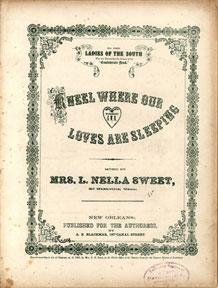 “Kneel where our loves are sleeping. They lost but still were good and true.
Our fathers, brothers fell still fighting, We weep, ’tis all that we can do.”

The following year the Commander of the U.S. Army, moved by the ceremonies of the South, declared a similar tradition in the North.

“The 30th of May, 1868, is designated for the purpose of strewing with flowers or otherwise decorating the graves of comrades who died in defense of their country during the late rebellion, and whose bodies now lie in almost every city, village, and hamlet churchyard in the land…

“Let no wanton foot tread rudely on such hallowed grounds. Let pleasant paths invite the coming and going of reverent visitors and found mourners. Let no vandalism of avarice or neglect, no ravages of time, testify to the present or to the coming generations that we have forgotten, as a people, the cost of free and undivided republic.”

Now is the cleavage deep of North and South
Well closed, —the years o’er-cover it, as grass
Softens and sweetens some dry place of drouth
When comes the blessed rain; the requiem-mass
Is chanted of the mood that shattered peace:
Where common sorrows are, anger must cease:
Sorrow and love remain, while passions pass…

How like cathedral chimes the names we know,
Ringing above a leal united land:
Bull Run, Antietam; Gettysburg, Shiloh,
Sherman’s grim march to reach the white sea-strand,
Lookout’s cloud fight, The Wilderness, —each bell
Reverberating valor—list! they tell
How Lincoln and Lee are friends, and understand.

What is a patriot? Not the man who swears:
“My country, right or wrong;” nor he who claims
That sacred thing, yet like a dastard dares
To use her to his ends, to hide his shames;
…

For higher, holier than the will to war
The will to love, —now may the path of Peace
Within our states be like the pilot star
In the night sky, by myriads to increase
As the millennium broadens, gleam by gleam:
This is the prophet’s word, the poet’s dream:
All nations living in love’s great release.

After WWI, Memorial Day included remembering the dead of other wars, not just the Civil War.
To date, more Americans died in the Civil War than in all other wars combined.

Francis Miles Finch’s The Blue and The Gray

One Reply to “Memorial Day”